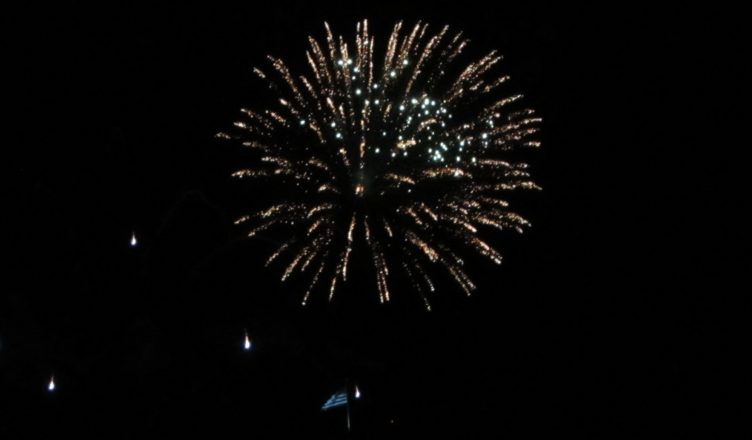 Sitting on a bench in Levee Park a few years ago, watching the American Queen River boat unload her passengers, was like a trip back to turn-of-the-century life on the Mississippi river.  Ladies of the town, dressed in Victorian outfits and carrying parasols, strolled up and down the walkway while the boatmen untied their ropes and engineered the gangplanks. Vendors were selling souvenirs and refreshments, children and dogs were frolicking.  One could easily forget, for the moment, that it is the 21stcentury. 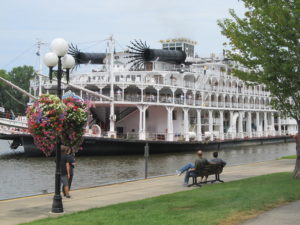 Coming from a suburb of Minneapolis to Red Wing (1999), I was amazed at the difference from life in the Twin Cities.  Here life reminded me of the time when America was largely a land of small towns and rural countrysides; people were sentimental and patriotism ran high.  Our first experience watching the River City Days parade from our front porch was a delight.  All the onlookers stood when the flag went by!  It brought tears to our eyes. 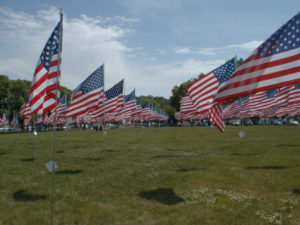 The Fourth of July is the perfect time to turn back the clock to those days when everyone—farmers, merchants, bankers, girls, boys, and dogs—turned out for a celebration of freedom.  For some, it is a picnic in the park followed by fireworks from across the river.  This is the time for old-fashioned food and lots of good company and fun.  The menu will be totally traditional and easy so I can partake in the fun, too!

Ice cold freshly made lemonade is the quencher I like best.  Beer and wine coolers will be available for adults who prefer them.  Fire up the grill and make good ol’ hamburgers and hot dogs.  Why not?  It’s a day of tradition.  Beans and potato salad?  Of course.  And for dessert?  Watermelon.  On a hot day, a slice of chilled watermelon is as refreshing as a cool drink; besides, the color is great for the patriotic soul in me. I will include a special cake—Aunt Fannie’s Liberty Cake with Lemon Icing. 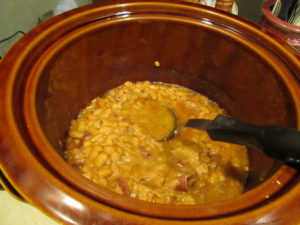 Brown hamburger, onion and green pepper in skillet.  Pour off fat; put into large Dutch oven or slow cooker with the rest of the ingredients.  Cook on low heat for 1-2 hours or in slow cooker on low for 4 hours. 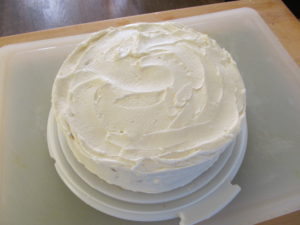 In large bowl of stand mixer, cream butter; gradually add one and one-half cups sugar and cream until light.  Sift flour with salt and baking soda.  Combine buttermilk with lemon juice, rind and almond flavoring.  Then alternately add sifted flour mixture in thirds with buttermilk mixture.  Beat well after each addition.  In a second bowl, and with clean beaters, beat egg whites until frothy; add cream of tartar and remaining two-thirds cup sugar gradually, and continue beating until egg whites are stiff.  Fold butter-flour mixture into beaten egg whites, working carefully so as not to lessen the volume of egg whites.

Turn into prepared pans.  Bake until well risen, light brown, and firm to the touch, about 30 minutes.  Do not over bake.  Remove from oven, let cool 10 minutes, then turn out onto wire rack to cool.  When thoroughly cooled, fill and frost with Lemon Icing.

In medium bowl, combine sugar and cream, beating until moderately thick.  Add lemon juice and peel; stir to blend.  Ice layers as you stack them together and then lightly cover both top and side of cake.

Aunt Fannie stuck miniature flags and red candles all over the top of the cake and made everyone sing “The Star-Spangled Banner”   Then she would quote her favorite author, James Whitcomb Riley:

Sing for the good that is to be,
Sing for the eyes that are to see
The land where man at last is free,
O sing for Liberty!