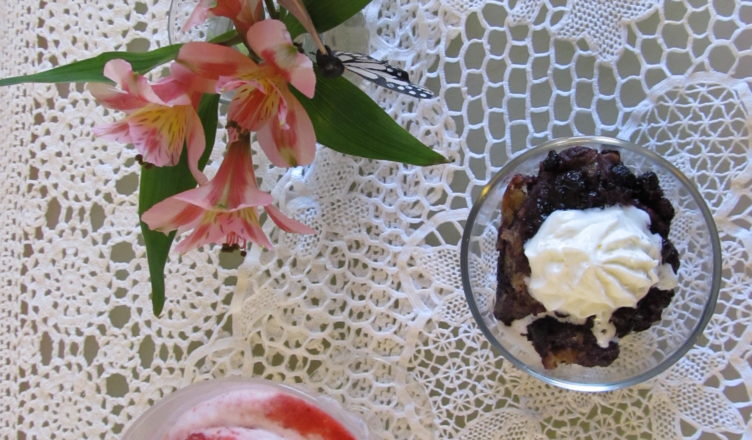 Today is April Fool’s Day and I have always wondered how this celebration began—so I set out to discover the origins of Fool’s Day.  That turned out not to be as easy as it sounded.  The best I could do was this:  “The origins of April Fools’ Day have never really been determined.  Some speculate that it derives from an ancient New Year festival celebrated at the vernal equinox.  It bears certain resemblances to Hilaria, an ancient Roman festival in honor of a nature goddess, which was celebrated on March 25…but whatever its roots, the timing of April Fools’ Day is certainly appropriate, since it occurs during that part of the year when nature fools men with capricious changes” [in the weather].

There is actually a dessert called a fool; very old-fashioned and probably originating in England.  How did a dessert come to be known as a fool?  It may have come from the French word, foule meaning pressed or crushed and refer to the combination of crushed fruits and thick cream.  It is a simple dish—but sublime.

And then there is the dessert known as flummery. The dictionary definition of that word is:  1. A name given to various sweet dishes made with milk, eggs, flour, etc.  2.  Empty compliment; unsubstantial talk or writing; mumbo jumbo; nonsense.  That last one fits the foolish theme.

Both of these desserts are fantastic and as easy as can be—maybe the name of them comes from fooling our guests into thinking we spent hours on these delightful desserts!   There are a number of simple variations to each—especially the fruit used to make it.  Here are the two that I tried with their variations: 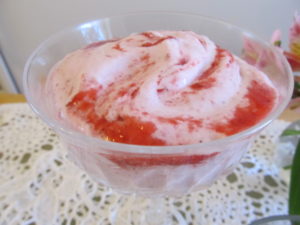 Put fresh or thawed strawberries in bowl and add optional orange liqueur and ½ the sugar (1/4 cup).  Set aside in the refrigerator for 2-3 hours.  Pour all but ½ cup strawberries into a food processor or blender.  Puree until smooth.  Pour into bowl and refrigerate for a few hours.  Put remaining strawberries into a food processor and pulse until still a little chunky.  Put them into refrigerator also for a few hours.  When ready to assemble fool, whip the heavy cream with the remaining ¼ cup sugar until fairly stiff peaks form.  Fold the puree into whipped cream very carefully. Spoon into pretty stemmed glasses, swirling at top.  Put remaining strawberries on top and just barely twirl them into cream, leaving some to show.  Serve immediately or refrigerate until ready to serve.

Variations:
Serve with drizzled ganache or a chocolate covered strawberry,
Make fool with strained pureed raspberries or blackberries
Use stewed, sweetened rhubarb for the fruit
Healthy alternative:  use yogurt in place of whipped cream or lighten yogurt with half whipped cream 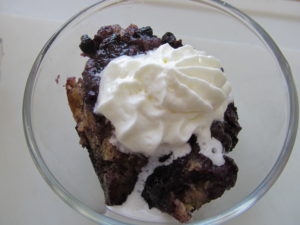 Preheat oven to 350 degrees.  Liberally spray a 1 ½-quart baking dish.  Mix blueberries, sugar, lemon juice and rind, nutmeg and water in large saucepan.  Stir over medium heat until sugar dissolves and mixture begins to bubble; allow to simmer for 10 minutes.  Melt butter.  Cut each slice into 3 strips and dip in butter.  Line the baking dish with a layer of bread.  Pour half hot berries over bread, add another layer of bread and cover with the remaining berries.  Bake for 20 minutes.  The flummery is excellent served hot or room temperature with whipped cream or ice cream.

Flummeries can be made with almost any fruit and can be thickened with oatmeal or cornstarch instead of using bread. I even found several recipes using gelatin.  This rhubarb variation is timely and easy and sounds delicious—no fooling!

Cut rhubarb in ½” slices.  Add water and sugar and simmer until mushy.  Add vanilla.  Mix cornstarch with a little cold water.  Stir into rhubarb; cook, stirring constantly for 5 minutes or until thick.  Serve warm or chilled with sweetened whipped cream.