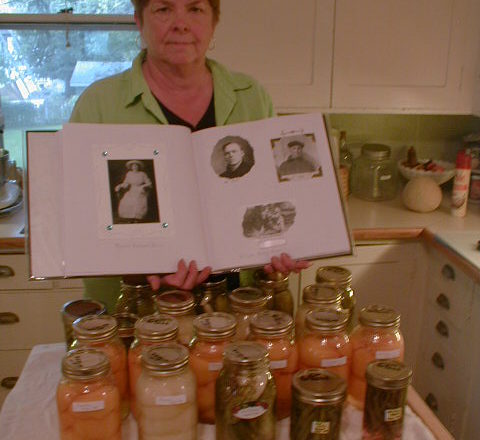 I mentioned that I had two grandmas that I spent time with in the summer.  Grandma DuBois lived in North Mankato and I wrote about her in another blog.  Grandma Dean lived in Magnolia, Minnesota, a very small town in southwestern Minnesota between Adrian and Luverne.  Magnolia boasted about 300 residents in the 50’s; I think it’s even smaller now.

Magnolia had two claims to fame:  a steakhouse and the hometown of Cedric Adams.  The steakhouse speaks for itself but I have heard that it has moved to Luverne and is still in business as the Magnolia Steak House.  Cedric Adams was a very well-known announcer throughout the 30’s, 40’s, and 50’s for WCCO radio in the Twin Cities.  He was also a columnist for the Minneapolis Star and Tribune.  I remember when we drove to Magnolia, there was a sign right outside of town welcoming you to “Magnolia, Home of Cedric Adams”. 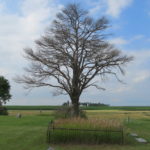 My great-grandparents had 14 children, of whom my grandfather was the oldest.  They were all raised in Magnolia. My father was the oldest of his family; therefore there were many great aunts and uncles living there when I was young who were younger than my father and their children about my age.  I had a great time playing with them—especially my cousin Sharon who lived across the street from my grandparents.

Sharon’s mother, Viola, was famous for her homemade doughnuts.  I have never tasted doughnuts that were that good since.  They were fresh from the oil pot and draining on absorbent paper when we would smell them wafting on the breeze and pile into the kitchen.  Aunt Viola was just sugaring them when we arrived and grabbed as many as we could eat.  I have tried many times to duplicate those doughnuts—but I just don’t have the knack—they’re always too soggy or too crispy or not tender enough or not the right flavor—it is an art I have never mastered.  The outside had just a slight crispiness and as you bit down further, the cake part was warm and sweet and tender and melted in your mouth.  And there was the sugar left on your lips to lick when you were finished.  My mouth is watering just remembering.

Grandma Dean was a great cook in her own right.  She was English by nationality and had a fondness for tea and saffron.  She sent away to England for the saffron which, in those days, was hard to come by in this country I guess.  Her saffron bread became a staple at Christmastime at our house, too, as my mother took up the tradition.  It wasn’t a favorite for me as a child but I love it now.  Saffron is a sophisticated flavor.

Grandma had a huge garden right outside her back door—at least a city block in size.  She grew everything:  sweet corn, squash, pumpkins, green beans, cabbages, peas, raspberries, melons, potatoes—more than I can list.  On their side yard they had a small apple orchard.  I loved the hard green apples and Grandma would get quite peeved with me when I climbed an apple tree and ate two or three—then come in and complain of a stomach ache.

Shelling peas and picking raspberries were the two garden chores I was given.  I enjoyed them both but especially the raspberries—every other one went in my mouth.  Fortunately Grandma must have anticipated that since she never scolded me for that.  Peas were fun to shell, too—and I must have been a hungry little girl because I could eat them raw out of the pod, too.  They had such a nice crunch and such a sweet taste, but I did save lots of those for Grandma’s famous (to me) creamed peas and new potatoes.  Little baby potatoes with paper-thin skins, boiled just until tender drowned in sweet peas, barely cooked and creamed.  My father waxed eloquent about this dish for as long as I can remember.  Mom would make it—but it wasn’t quite as good as when the peas and potatoes came out of your own garden that very day. 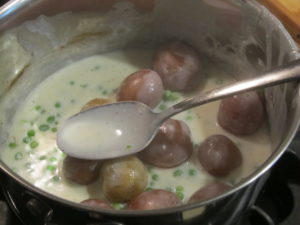 Raspberries were never made into anything like pie or jam—just served with cream and sugar for dessert.  Yum.  If there was a bumper crop and I hadn’t eaten too many, Grandma would can the raspberries for raspberry sauce in the winter.
Canning was the way Grandma and most of the other Magnolia women put their food away—freezers were very rare.  Grandma would send me down cellar for a jar of this or that and I loved the gray marine painted floor and the clean smell of cistern and cellar.  Grandma’s cellar was as clean as a whistle—you could have eaten off the floor.  She mopped that floor as she did all the others every other day.  Rows and rows of perfect canned peaches, green beans, peas, even beef lined her shelves.  When I attend the Homemaking building at the fair and see the canned goods, it reminds me of hers.  Everything was symmetrical and perfect; jams, jellies as clear as glass, pickles of uniform size and no cloudiness to the liquid.  She took a lot of pride in her work. 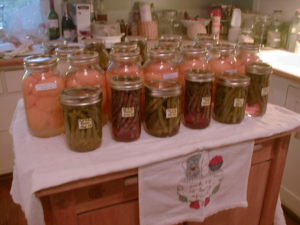