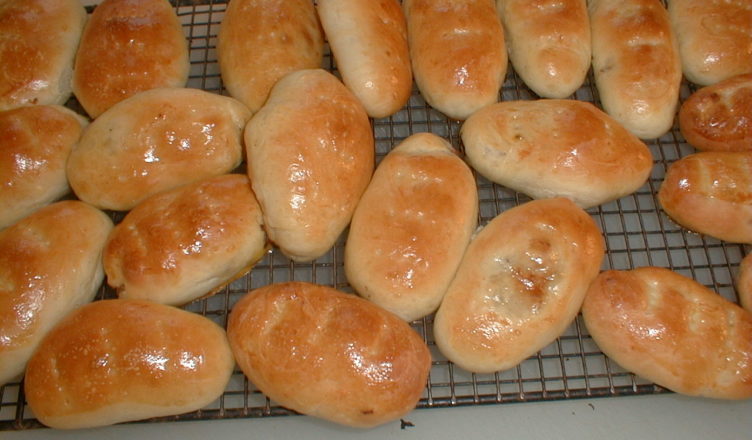 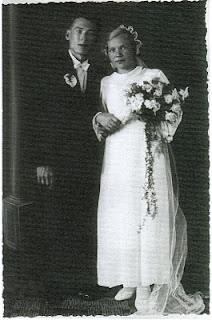 Family, traditions, culture, love—all come together in many ways, among them food. My beloved mother-in-law, Monika Gudrais passed away on December 28, 2007, and her funeral was held in Rochester the next Wednesday.

Monika escaped Communism in 1945 by carrying what possessions she could on her back and trekking through the forest with her immediate family: one child and one on the way (my husband), her husband, mother, sister and 2 brothers. They went first to Czechoslovakia where my husband was born, then to various relocation camps in Germany before being sponsored by a church in Hutchinson, Minnesota in 1950. The family moved to Rochester in 1952 where they remained until Monika, then a widow, came to live with us in 2004. She celebrated her 96th birthday in November.

Among the things she brought with her from Latvia was a recipe for piragi—Latvian bacon rolls, as she called them. She baked thousands of these delicious rolls as she gained a reputation and people in her community and church begged for them on every possible occasion. She always happily complied. When we first met, I remember her serving coffee and bacon rolls to diverse groups of guests at Sorensen’s Guest House across the street from St. Mary’s hospital. She spoke 5 languages: Latvian, Russian, Polish, German, and English and translated at Mayo Clinic in those languages whenever needed. She shared her table in her tiny dining room with relatives staying at Sorensen’s and needing her particular brand of love and care.

Upon her death, Monika’s family gathered in Red Wing; coming from from Maple Grove, Minnesota, San Jose, California and Providence, Rhode Island to bury and mourn her—and to celebrate her life. Of course, we spent an entire day making bacon rolls for us and for her funeral. Here, then, is the recipe—the first time it has ever been given out to anyone but family. If you try them, you’ll like them and I hope you’ll think of us—especially of a very special lady, Monika.

A word of caution: You can take modern shortcuts, such as using a heavy-duty stand mixer with a dough hook for the kneading and raising the dough in an oven, heated first to 200 degrees and then turned off before putting the covered dough in, but I truly recommend trying it just as it is written—her words—the first time. This recipe makes about 100—so cut it down if you like, but they freeze well and they’re really fun to make. You’ll be surprised how quickly they disappear.

Add 1 cup warm water and sugar to yeast in a very large earthenware bread-type mixing bowl. Let sit until very bubbly. Add 3 cups more water (warmer, but not over 110 degrees). Add milk, warmed to body temperature. Stir with a fork or a wooden spoon. While stirring, add 7-8 cups of flour and salt. Then add the cooking oil, all the while mixing. Continue mixing and add more flour just until dough leaves the sides of the bowl and begins to gather into a ball. Butter your hands, then knead (she did it right in the bowl, which is nice if your bowl is big enough) for about 20 minutes until the dough is smooth and satiny. Mix in with hands about 1-2 Tbsp. soft butter. Flatten the dough and add 1 teaspoon more butter and work it in.
Put clean kitchen towel over top of bowl and then wrap the whole bowl in a blanket. Set in a warm place away from drafts and set it on a pillow. Let rise about 45 minutes. Unwrap and assemble.
Assembly

Break off a piece of dough the size of a walnut. Roll it into a ball and then flatten it with a rolling pin to make a round circle of dough approximately 3 inches in diameter. With flattened circle of dough in the palm of your hand, put a heaping tablespoon of filling on dough circle. Careful not to get filling on your hands, bring edges of dough together and pinch, forming a ridge. Pinch the ridge tightly so rolls won’t open and spill out filling while baking. Then form the piragi into finger-shaped rolls and place, seam side down, on a greased cookie sheet with sides. Let sit for 5 minutes. Brush a glaze made with 2 lightly beaten eggs over rolls. Prick with fork tines 3 times. Bake at 400 degrees for 15 minutes or until golden brown.