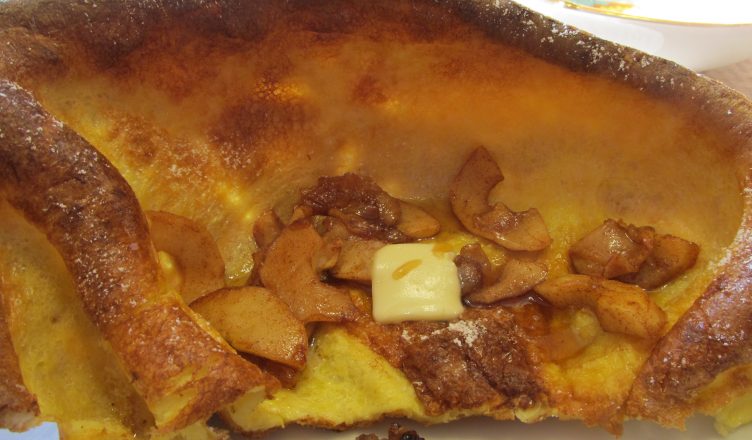 “…there is a bell rung call’d the Pancake-Bell, then there is a thing call’d wheaten floure which cookes do mingle with water, eggs, spice and other tragicall, magicall enchantments into the form of a Flip-Jack, call’d Pancake, which ominous incantation the people do devour very greedillie.”—John Taylor, the Water Poet 1620 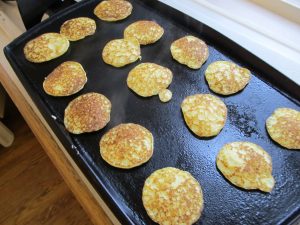 Before starting the fasting, austere season of Lent, celebrations of Mardi Gras are well known; Shrove Tuesday, not so much.  But since I am a great fan of pancakes, I’ve decided to plan a celebration featuring them on Tuesday.

Pancakes cover a large range of dishes; everything from crepes, potato latkes, large lumberjack-size flap-jacks, to delicate Swedish pancakes and oven baked Pannekuchen. They also span the flour-water-oil-eggs-style to healthy, hearty whole grain cakes.  They can be leavened with baking powder, eggs, or yeast—there are even sourdough pancakes.

My everyday, standard recipe is still probably my favorite.  I often give my children a container full of this pancake mix for a Christmas gift; and although it is easy to make, they seem to appreciate me making it for them.

Mix everything together well with a large wire whisk.  Store in a cool, dry place.  To prepare:  use 2 cups mix, 1-3/4 cups water, 1 egg and 2 ½ Tbsp. canola oil.  Mix just until blended.  Bake on a hot griddle, sprayed with vegetable spray.  Can be thinned with more water if thinner pancakes are desired.

Potato Pancakes are a favorite in Eastern Europe.  My late mother-in-law, Monika, loved them and ordered them whenever they were on a menu.  Here is the Latvian version:

Mix eggs, potatoes, onions, salt, pepper, and flour together in a food processor until smooth.  Fry mixture in butter or oil, using about 1 tablespoon batter per pancake.  Serve with sour cream and applesauce.  Makes 10-15 pancakes.

Both Giant German Pancakes and Swedish pancake are very different versions of the pancake. 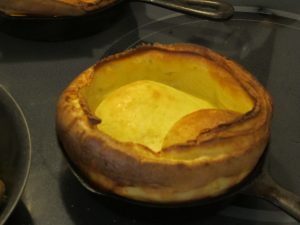 Preheat oven to 450 degrees.  Generously butter an 8-or-10 inch cast iron skillet.  In a bowl, beat eggs with a fork until blended.  Add flour and salt in 4 parts, 2 tablespoons at a time, stirring until smooth.  Add milk in 2 parts.  Lightly stir in melted butter.  Pour into prepared skillet.  Bake in oven for 20 minutes.  Turn off oven and leave 10 minutes.  Serve with butter, powdered sugar and lemon juice.  You can also fill shell of pancake with sweetened berries and whipped cream or sausages and scrambled eggs.  A very versatile recipe.

You really do better with a special plattar pan made of cast iron with seven equal-size indentations to contain the batter during cooking and thus make perfect little “silver dollar” size pancakes.  If you don’t have one, bake them like crepes, only use 1 tablespoon batter on a lightly greased skillet; turn when brown and bake other side briefly. 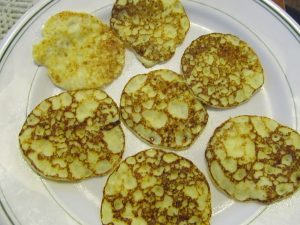 Pick up each pancake with fork tines at edge of pancake and flip over.  Bake briefly—the amount of time to flip each pancake is enough.  Remove to an oven-proof platter and cover loosely with foil.  Keep warm in 170 degree oven until ready to serve.

To serve: stack pancakes with a sprinkle of granulated sugar between each one.  Put about 6 in a stack.  Pour melted butter over and then lingonberries and crème fraiche or blueberry compote and sweetened whipped cream.