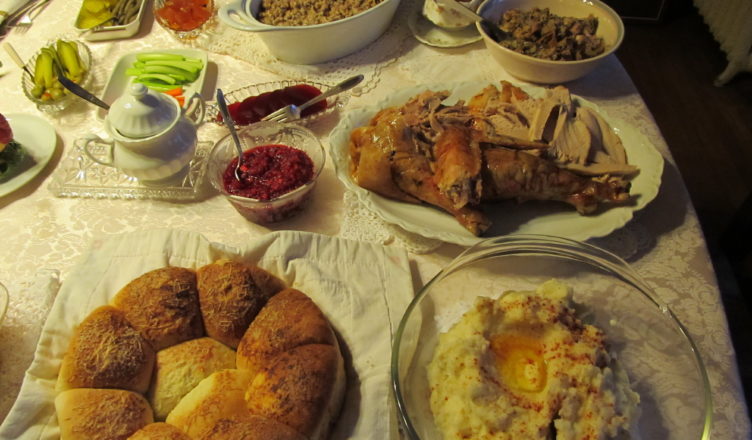 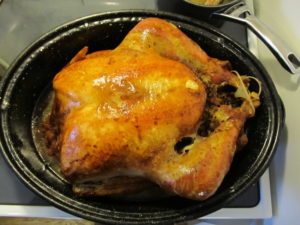 As we prepare for the great Thanksgiving feast, take a look back over our dining history.  If, as Brillat-Savarin has said so famously, “You are what you eat,” the history of the American people can be revealed by the history of the foods they have and are eating.   From the inception of the Jamestown colony in Virginia through the end of the first decade of the 21st century, we have shown profoundly how we have changed and what we’ve become, step by step, by the foods that we eat and even more by the style in which we eat.

From the beginning of colonization by Europeans in the new world, the character of the men and women who came to these shores was the defining characteristic that made America the greatest and most powerful country in the world.  The great majority were men of morality and vision; a sturdy breed with a natural inventiveness, independence and courage.  Above all, they were people of faith who depended on and credited God with their destiny.  With all the natural resources:  fertile soil, lush grasses, thick forests, coal and iron; the bison, bears, wildcats, foxes, elk, deer, beavers, birds and water fowl of every description, and the fish that teemed in its great clear and uncontaminated rivers, it wasn’t long before a bounteous American cuisine came into being.

That does not mean, of course, that the earliest white men who came to America’s shores were well-fed and prosperous from the start.  As we have all learned in grade school, the pilgrims and other first settlers almost starved to death the first winter they were here.   It is not only a true story, but a deeply symbolic one as well that they shared their provisions with the Indians and each other at the feast of Thanksgiving that first harvest year.

A great deal of our food tradition emanating from these early settlers is English in nature, as it would necessarily be.  Although the earliest settlers, both in New England and in Virginia had sparse provisions after crossing the Atlantic (none of the sea vessels were adequately stocked with food), it was not long before the provisions started coming.  Rev. Francis Higginson, the first minister at Salem wrote,

“Before you come, be careful to be strongly instructed what things are fittest to bring with you for your more comfortable passage at sea, as also for your husbandry occasions when you come to the land.  For when you are once parted with England you shall meete neither markets nor fayres to buy what you want.  Therefore be sure to furnish yourselves with things fitting to be had before you come: as meale for bread, malt for drinke, woolen and linnen cloath, and leather for shoes, and all manner of carpenters tools, and a great deal of iron and steele to make nails, and locks for houses, and furniture for ploughs and carts, and glasse for windows, and many other things which were better for you to think of there than to want them here.”  He next set down a catalog of necessary victuals per person for the first year, viz.: “8 Bushels of meale, 2 Bushels of pease, 2 Bushels of Otemeale, 1 Gallon of Aquavitae, 1 Gallon of Oyle, 2 Gallons of, Vinegar, 1 Firkin of Butter; also Cheese, Bacon, Sugar, Pepper, Cloves, Mace, Cinnamon, Nutmegs and Fruit.”

The English were not the only people to come, however.  Throughout the colonies there was a mixture of people from Western Europe.  There were the Dutch along the Hudson, the French in the Carolinas and the Swedes on the Delaware.  Danes, Germans, Portuguese, Italians and Jews mingled with the Dutch along the Hudson Valley even in the early days of the colony of New Amsterdam.  All of these ethnic groups contributed their cuisines to early America but it was the English that set the foundation of the new “American” cuisine and we still see that influence in many of our national dishes.

The New Englanders were an industrious group.  They were extremely independent in nature, as is illustrated by the huge risk they took coming to this country in the first place.  After a very few years of hardship and lack, they learned the pattern of the seasons and began to produce recipes we use today.  Foods which spring from the Indian “corn” or maize, the exclusively new world poultry—the turkey—as well as shellfish, cod, mackerel, lobster and crabs formed their daily diet.

Cooking as we know it was, of course, unknown.  Recipes or “receipts” were vague—most people learned to cook by watching their mothers.  Terms like “butter as big as a walnut” or “a piece of fresh butter” were used and everyone presumably knew how much that was.  Most of the colonial recipes were word of mouth or hand-written slips of paper; we don’t find actual printed cookbooks until the 18th century and these are very rare.  Some cookbooks from the 18th century were published in England such as Hanna Glaffe’s, The Art of Cookery, Made Plain and Easy, 7th ed. (London, 1760) from which this Ginger-Bread Cake recipe comes:

Take three pounds of flour, one pound of sugar, one pound of butter rubbed in very fine, two ounces of ginger beat fine, a large nutmeg grated; then take a pound of treacle, a quarter of a pint of cream, make them warm together, and make up the bread stiff; roll it out, and make it up into thin cakes, cut them out with a tea-cup, or small glass, or roll them round like nuts, and bake them on tin plates in a slack oven.

After a shaky start, New England colonies had recipes that are still made and are delicious.  They raised orchards of apples and pears, used the wild grape and cranberries to make preserves and made wonderful cheeses from their dairy herds.  They adapted to the more plentiful wild game before their herds of domestic cattle grew large enough to slaughter for beef and made old English dishes to suit their native tastes.

Even in winter, the sea provided an abundance of fish and shellfish for their suppers. This abundant seafood was often made into chowders.  As soon as the ships were commonly making their runs around the Horn to China, exotic spices were brought home adding flair to many dishes; among them, turmeric, ginger, peppercorns, cinnamon and cloves.

Molasses from the West Indies (sometimes referred to as treacle), maple syrup and wild bee’s honey were used to make the many sweets that Americans have loved right from the beginning.

They also learned to make notable dishes from native foods which were indigenous to the new world such as elderberries, dandelions, wild turkey, quail, pumpkins, cranberries, and, of course, corn. There were some “new” foods, too that became popular.  All of them originated in the new world, but the colonists didn’t use them until they had crossed the Atlantic and come back again.

After much trial and error the colonists of New England grew accustomed to corn, squash, pumpkins, some seafood, wild turkey, maple sugar, cider vinegar, an abundance of game such as ducks, geese, passenger pigeons and wild swans.  Many of the wild game birds and meats were tough and every region of early colonists had its one-pot cooking recipe to tenderize them: New England boiled dinner; New Amsterdam (later New York) Hutspot; Pennsylvania Dutch Sauerbraten; and Southern Brunswick stew or burgoo.

In saucepan mix milk and molasses; stir in cornmeal, ginger, cinnamon and salt.  Cook and stir till thick, about 10 minutes.  Stir in butter.  Turn into a 1-quart casserole.  Bake, uncovered, at 300 degrees about 1 hour.  Serves 6.