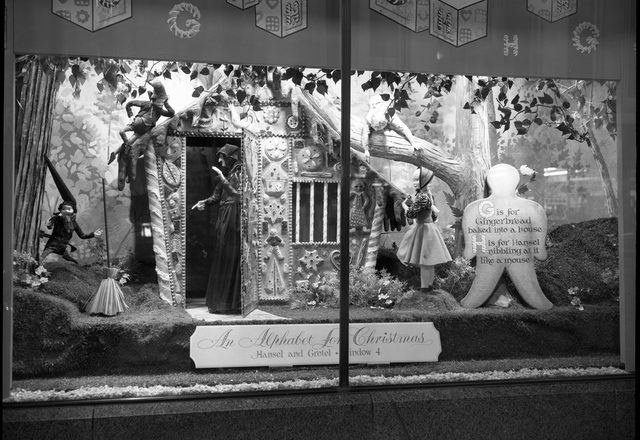 Anyone growing up in the Twin City area during the 1950’s may remember the magical downtown of Minneapolis at Christmastime.  The Christmas song “Silver Bells” is especially nostalgic for there were truly Santas on every corner ringing bells for the Salvation Army.  I can remember one particular day when the sky was gray with a wintry smell in the air and melting snow turning to slush was underfoot on the sidewalks.  I must have been pretty young for my mother was holding my hand and warning me to stay attached to hers.  We walked by Woolworth’s window where you could see the backs of people seated at the lunch counter and then up the block to Dayton’s department store.

Dayton’s was the center of the downtown retail business.  Yes there was Donaldson’s and Powers and Young Quinlan, but Daytons’s was THE store.  And this time of year it had magical windows.  As you walked along the sidewalk in front of the display windows, each one held a scene magnifique.  Mechanical figures that moved depicted some wonderful Christmas scene. 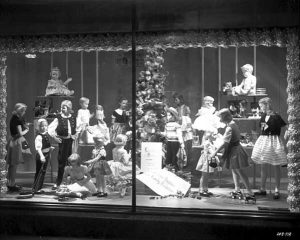 One I particularly remember was of a family trimming a beautiful Christmas tree and the tree was lit with old-fashioned candles which the father would light periodically and all the candles and the rest of the window would light up and then the scene would begin again.

We would go around to every side that had windows some large and some quite small, where the figures were miniature.  There was a delight in every one.  Then when we reluctantly had to return to our bus stop to go home, we would pass the Radisson parking ramp where the most heavenly  smell of caramel corn greeted us from the vendor right next to the ramp.  Sometimes Mama would treat us and sometimes not but the smell lingers in my memory today and so I decided to make some caramel corn to relive the wonder of these long ago trips to Minneapolis at Christmas.