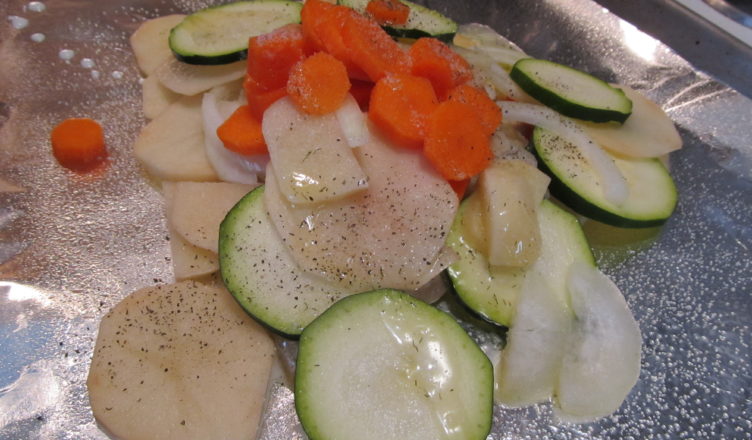 February Eighth was Boy Scout Day.  To celebrate, I have decided to go to an old scout specialty—the dinner in a foil packet.  I made these in my girlhood camping days and repeated them often as a mom of scouts.  Some call them “Hobo Stew” and some, “Camp Dinner,” but our family adopted them as an official cookout meal known as “Foiled Agains.”

The basic Foiled Again taken from the standard scouting recipe is a patty of hamburger covered with sliced raw potatoes, sliced carrots, chopped onions and salt and pepper.  This is all wrapped tightly in aluminum foil and put into the campfire or on a grate over the fire.  It cooks for about 45 minutes, with several turns and changes of placement and then eagerly opened (careful not to burn your fingers on the pack or by the steam!) and eaten with gusto.  Not exactly gourmet fare, but delicious nonetheless.

A close cousin of “foiled agains” is food “en papillote.”  This is defined as food cooked in a greased paper wrapper.  The usual paper is parchment but the method of sealing the parchment is time-consuming and difficult.  I think aluminum foil is a great substitute unless you are serving a very special meal to guests and want the presentation to be impressive.  If you are worried about food cooking in aluminum foil, you can line the foil with parchment paper.

This is a great way to create your own customized “TV Dinners” without the tray.  If you want to make a dinner in a divided tray, like the old time TV dinner, you can purchase disposable divided trays in both heavy paper (for microwave) and aluminum (for conventional oven).  If not, you can put several of the ingredients together in one foil pack, thereby allowing the meat or fish juices to permeate and flavor the vegetables.

Some foods lend themselves to this idea better than others and here are a few I especially like.

Tear off a sheet of heavy-duty foil 15” by 15” or use two sheets together of the same size.  Use a small amount of the butter to smear over a 6” square in center of foil.  Spread ½ cup rice on buttered square. Put ¼ of onion slices over rice; ¼ of mushroom slices and ½ Tbsp. toasted pine nuts next, then lay ½ hen, skin-side-up over rice mixture.  Season with salt, pepper, tarragon and parsley.  Seal foil by bringing opposite ends together and folding two times over, then pressing to chicken, then fold up ends, using several folds until they are sealed.  Repeat with other three halves of chicken and remaining ingredients.  Put packets on large shallow baking pan and bake at 350 degrees for 1 hour.

If you want to freeze for later use, put packets in freezer.  When ready to cook, put on baking sheet as above and bake for 1 hour 30 minutes at 350 degrees.

Another food that makes a wonderful “Foiled Again” is fish.  For the following recipe you can use any kind of fish steak or fillet. 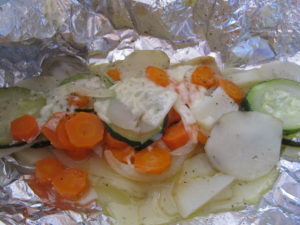 Thaw frozen fillets and cut into 6 serving-sized portions.  Sprinkle fish on both sides with salt and pepper.  Combine butter, parsley, lemon juice, salt and dill weed.  Cut six 12-inch squares of heavy-duty aluminum foil (or double regular weight).  Spray with Pam.  Place 1 tsp. of the parsley butter on half of each square of foil.  Place fish in butter.  Separate onion slices into rings and place on fish.  Top with ¼ cup carrot slices.  Pour remaining parsley butter over carrots, dividing evenly among the 6 packages.  Top each serving with a cheese slice.  Fold foil over cheese and fish (using drugstore wrap: placing the object lengthwise on the paper, bringing matching ends together and folding them over at least once and bringing up other ends, seal. Place sealed packets on a baking pan.  Bake in preheated 400 degree oven for 35 minutes or until fish flakes easily when tested with a fork and vegetables are tender.

To freeze for later:  Date and label, put all packets together in a plastic freezer bag.  To serve when frozen:  Put frozen foil packages on baking pan and bake in a preheated 400 degree oven for 65 to 75 minutes.  Open a package and test it after 65 minutes.