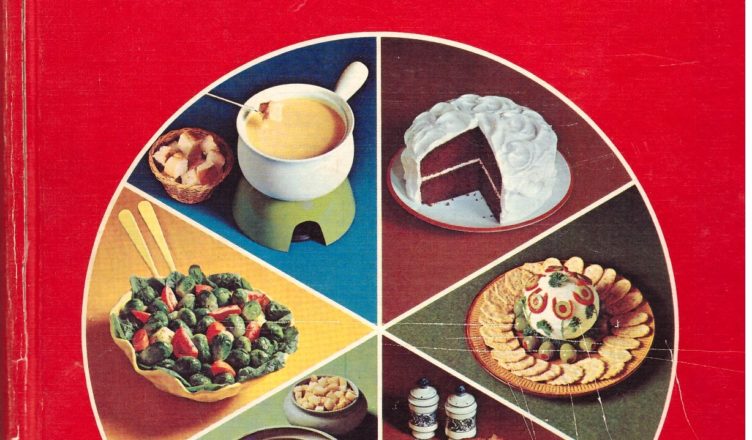 A few years ago when I was new to Red Wing, we were invited to a party at one of the beautiful old homes in town.  I was admiring the newly decorated butler’s pantry and the row of interesting cookbooks on the shelves of the pantry.  I happened to mention that I have an extensive collection of cookbooks—close to three thousand if you count small pamphlet-types.  One of the other guests, a man who was trained as a chef and who has since become a good friend, asked me which of my many cookbooks I used the most.  A great question and one I had to stop and think about.  Finally, I blurted sheepishly, that I guessed it was either Betty Crocker’s 1972 edition or the same vintage Better Homes and Gardens. 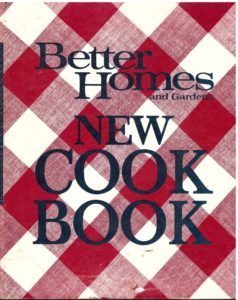 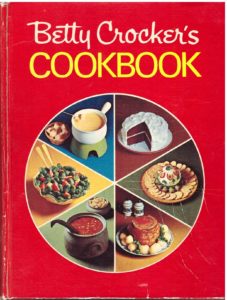 He couldn’t hide his look of disappointment and disgust. I was slightly embarrassed, wondering why, with all my other choices, I turn to these two most.  Here’s my conclusion:

When I was a young bride, I already knew how to cook, as I have mentioned before.  If I was making, spaghetti, or meatloaf or a roast or fried chicken, I didn’t need a recipe; I’d watched my mom and learned to do it.  When I made a cake or pie or bread, where the exact proportions of the ingredients really count, I did need the recipe.  As wedding gifts, most brides those days (the 60’s) received the two cookbooks mentioned above.  So, even today, when I can’t remember the precise amounts to bake or put together a certain dish, I go back to my old standby.  Now, if he’d asked me which I read the most, it would have been an entirely different matter.  I just love reading my cookbooks, from old, antique and obscure to very new and trendy. 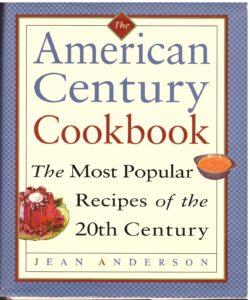 One of my favorites is the American Century Cookbook  by Jean Anderson, in which she chronicles the culinary change in America during the entire 20th century.  The result is a fascinating compendium of the recipes our mothers and grandmothers loved and at how our own tastes have evolved.  Especially interesting to any cookbook collector, she cites the cookbooks where she found the information, most of which are in my collection.  That leads to another hour or two to read that cookbook, etc.  I can spend a lot of time on this hobby and I love it. 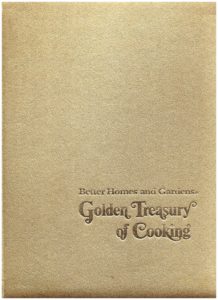 Another favorite along these same lines is the Better Homes and Gardens’, Golden Treasury of Cooking, published in 1973. In this tome, beautiful pictures and a fold-out page of each decade, beginning with the 30’s and touching on the ‘70s add to the fascination.  These pages include items representative of the decade in ways other than cooking.  For instance, the 30’s page shows a Look magazine cover with Roosevelt on it and an old Crosby radio, along with a movie poster of “Gone with the Wind” Although it richly emphasizes its own publication and the effect it had on the cooking trends, it is an interesting look at the progression of food styles.  I found especially interesting, after the fact, the projection of the 70’s food:
Not all shopping will be done by home-based computers.  But even at the supermarkets, technology will eliminate the wait at the check-out counter.  Purchases will be placed on a conveyor belt and a laser beam will scan the coded price symbol, then feed the data into  a minicomputer, which figures the bill in a flash and then produces a receipt listing prices, taxes, bottle return refunds, etc…many wrappings will be designed to self-destruct or be eaten.  Odorless, tasteless wrapping films and materials may melt or evaporate during cooking to ‘dissolve’ the problem of disposing of packaging materials.
…Metrics will be the new math of the seventies with the changeover, starting late in the decade, scheduled in stages over a 10-year period.  At home, metric spoons and utensils will replace old standbys, and cook books will print recipes using the new measurements.

Ah, well.  You see why these cookbooks are so fascinating. 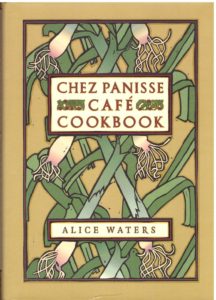 For the trendy mode, I think I would have to pick Alice Water’s Chez Panisse Café Cookbook.  Even though it has been seven years since it was published, and the restaurant has been around for 35, it seems to represent the current style of food: using fresher ingredients, unusual ingredients, depending largely on simple food, incorporating less well-known ethnic foods and very au courant presentation.  Since the 1970’s fresh produce of much greater variety has appeared in our supermarkets and our farmer’s markets.  Many of today’s trends, especially in comparison to older styles are a direct result of this abundance.