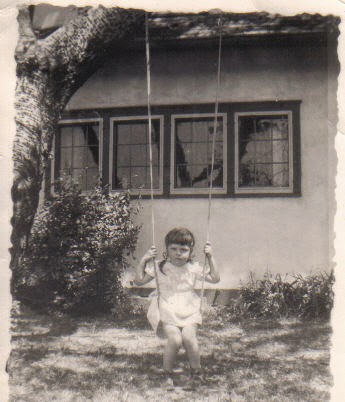 I had two grandmothers that I visited every summer. One lived in North Mankato, Minnesota. She was a widow living in a beautiful English Tudor home with 4 bedrooms, dining,living, kitchen and sunroom.  Sunrooms used to be very common—they were not like solariums of today—no glass panels or hot tubs. The room had lots of windows and was open to both the living room and the dining room. That Grandma worked at Martin and Hoer’s Jewelry store so my cousin (6 months older) and I were on our own during the day. We were never at a loss for something to do, though; Grandma’s house was full of fun things to keep us busy. She was a magazine fan and had stacks and stacks of Women’s magazines: Ladies’ Home Journal, McCall’s, Good Housekeeping, American Home, Better Homes and Gardens and more. In those days, women’s’ magazines were really fun. We spent hours going through those magazines, cutting out pictures of movie stars that we loved (they were in commercials, usually, such as soap or skin cream or the movies that they were starring in). Then we took on their personas and pretended. I was Debra Paget and she was Susan Hayward.

When we tired of that, we turned to games that Grandma had around. A card game called Touring or Chinese checkers. Of course, lunchtime rolled around and we were always starving. A lot of times, Grandma would have told us to walk over town and meet her at Woolworth’s lunch counter. There we almost always ordered the same lunch: grilled cheese sandwiches served with potato chips and a dill pickle, a lime phosphate and a big almond cookie.

When I was there by myself or with my brother (4 years older) I would spend hours playing with Grandma’s china-head pin cushion doll. Grandma had a collection of handkerchiefs that was stupendous. They were stored in a small cardboard chest of drawers that sat on a large, regular dresser drawer. She let me take the small chest and the doll and a bunch of pretty hat pins and dress the doll in thousands (or so it seemed) outfits made up of those handkerchiefs.

Another highlight of the day was going to the corner store. We could spend an hour looking at all our choices with the nickel we had. There were tons of candy bars and frozen confections like push-ups or popsicles, but, unlike the little store up in St. Louis Park where I lived, this store had ice cream in large bulk cartons where a clerk would dip out a cone in your favorite flavor. After looking at everything and leafing through a few Little Lulu comic books, I would almost always end up with a cone.

As we strolled back the 3 blocks to Grandmas, we had to pass Koppen’s Farm. It was a small farm right in the middle of the town—and they had a big barn in front where they sold the produce from the farm. Mr. Koppen was a large man who wore old-time overalls and spit tobacco all the time—much to my grandma’s disgust. She didn’t really like us to spend much time there although she would send us down to pick up sweet corn or some tomatoes. His daughter, Jane was also a large woman who was a friend of my mother. I remember my mom saying that Jane had served her an onion sandwich for lunch once—I tried it one time after I heard that but our onions were probably stronger than hers—because I couldn’t really eat it.

That North Mankato house was situated on South Avenue which butted up to large woods. Right next to the house was a sand road that was bordered on one side by the woods and the other by a neighbor’s house. We could follow the sand road down to the Minnesota River (about a block or so). At that time, the river was pretty dirty. The only fish in it were carp (or so my mother said). When she had been a child growing up in that house, she said the river was full of great fish, like Northern Pike and Walleye. She and her brothers fished all the time in the summer. Since Mom grew up in the Great Depression, they ate all the fish they caught. The bathroom in that house (on the second floor) looked out on the back yard and the woods just beyond. The toilet was situated right next to the window. Mom said that her brothers took their shotguns with them when they used the bathroom and sat on the toilet and shot squirrels for dinner. I’ve often wondered if that was really true.

When Grandma came home from work, she was usually too tired to make much of a dinner. Our favorite supper was waffles. She had some plates with a little Dutch people and a brown floral background that we called her “waffle plates” because she always used them when we had waffle suppers. I still make her waffle recipe which I got from her many years later—and everyone agrees they are the best waffles ever. Though I’ve searched far and wide, I have never found plates like hers—and I would dearly love to have them.

An excerpt from American Home Cooking, by Cheryl and Bill Jamison talks about Brunswick stew:

Raymond Sokolov tells the most common story about the origin of Brunswick stew in Fading Feast (1983). According to the account, a Virginia slave named “Uncle Jimmy” Matthews created the concoction in 1828 for Dr. Creed Haskins and friends, using squirrels he shot in the woods of Brunswick County. Descendants of Haskins claimed that the original recipe contained nothing except squirrel, bacon, butter, onions, stale bread, and salt and pepper to taste, making it a meaty ragout. Cooks began adding other vegetables within a few decades, and around the same time started considering chicken as a viable substitute for squirrel. In Common Sense In The Household, (1871), Marion Harland, who grew up in Virginia, said you could use either meat, but gave a preference for squirrel (two large gray ones or three smaller critters). She also put potatoes, tomatoes, butter beans and corn in the pot. Other popular cookbook authors of the same period dropped the squirrel entirely and threw in extra vegetables.

Here’s a recipe for a modern Brunswick stew using chicken:

Sweat bacon and salt pork in a Dutch oven over medium heat. When fat is well rendered and meat is brown and still limp, stir in the onions and cook until soft and translucent, about 5 additional minutes. Add the chicken and cover with 10 cups water. Cook uncovered for about 1 ¼ hours, until chicken is tender. Remove the chicken and set aside until cool enough to handle. Stir in the lima beans, corn, tomatoes, green beans, Worcestershire sauce, mustard, pepper, salt, and cayenne, and continue simmering 30 additional minutes. Shred the chicken into bite size pieces and return to the pot along with the mashed potatoes. Continue to simmer until the meat and vegetables are quite soft and meld together into a thick stew, another 30 to 45 minutes, stirring up from the bottom occasionally. Add more water if needed to keep the stew from drying out. Stew will improve after cooling and reheating.

If you have a few squirrels lying around, by all means use them!