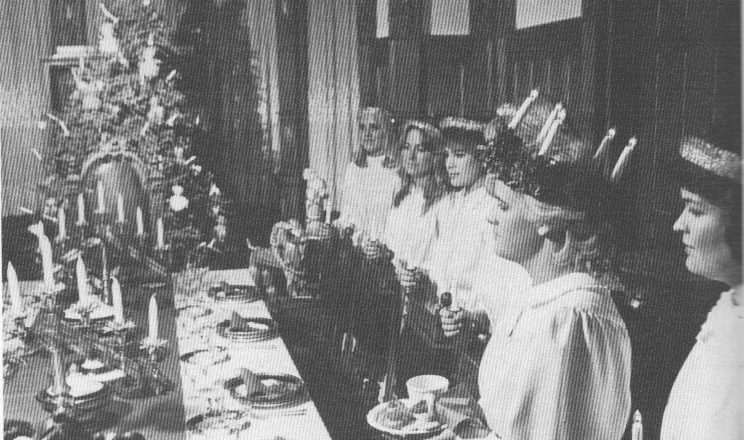 If you’re looking for something to celebrate this time of year, there’s no dearth of special holidays.  For starters Hanukkah begins on December 22, this year, and goes for 8 days.  If you don’t celebrate Hanukkah, 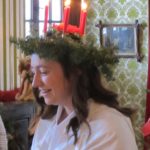 perhaps you put out a wooden shoe filled with straw for St. Nicholas’ reindeer last week or you may be preparing to celebrate St. Lucia Day today, December 13th.

If those days don’t resonate, how about the Mexican Posada Feast on December 15th?  You get the idea—and of course, Christmas is coming, followed closely by New Year’s Eve and Day.

All of these special days have special foods that go with them and whether you actually celebrate the holiday or not it is fun and festive to fix some of the appropriate foods.

I grew up in St. Louis Park and many of my friends and schoolmates celebrated Hanukkah.   Jane Lieberman, who lived next door, was a close friend and our families took turns celebrating Christmas and Hanukkah; that is they came over for a get-together once during the Christmas season and we went over there for one night of Hanukkah.  The food I remember loving best was potato latkes served with applesauce and sour cream.  And I was envious of Janie because she got presents for eight consecutive days.

Another friend, whose name was actually Lucia, came from a Swedish family that always celebrated St. Lucia Day on December 13.  Lucia, the eldest daughter, was usually the Lucia Day queen as befitted her status and her name.  She wore a crown of lighted candles and served delicious buns and coffee to the family and guests.  I was invited once and so impressed with everything, but especially the food: lussekatter (Lucia buns), baked in a traditional S shape and flavored with saffron and ginger-flavored cookies called pepparkakor.

If you’re in the celebrating mood, try all of these foods and sample the cultural dishes of each.

Traditional for Hanukkah because foods fried in oil is a ritual symbol of the oil in the temple lasting for 8 days.  Originally these were tradition for German Jews, but have been adopted as a symbol by East European Jews, replacing the buckwheat blini fried in goose fat. 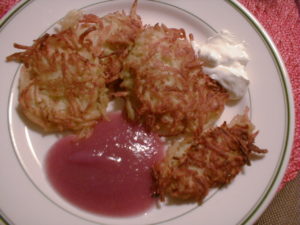 Mix potatoes and onions.  Let stand for 10 minutes and drain off accumulated liquid.  Press and squeeze vegetables to remove all possible liquid.  Add salt, pepper, baking powder, egg and flour.  Mix well.  Heat butter and oil in 10-12-inch frying pan over medium high heat.  Drop batter by tablespoonful or mixing spoonful into fat mixture.  When brown on underside, flip latke over and brown other side.  Adjust heat so that cooking time is about 5 minutes. Drain on paper towels.  Serve with sour cream and applesauce.

Core, peel and cut the apples into large chunks, tossing them with the lemon juice in a large heavy pot.  Add the cider, sugar and cinnamon stick and bring to a boil over high heat.  Reduce the heat to medium-low and simmer, partially covered, until the apples are very tender, 15 minutes.  Uncover the pot and cook for 5 minutes more to evaporate some of the liquid.  Remove the pot from the heat and discard the cinnamon stick.  Use a potato masher to coarsely mash the apples with the juices.  Allow to cool to room temperature and then refrigerate, covered, for up to 5 days. 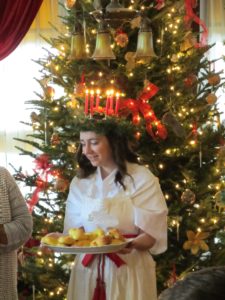 Dissolve yeast in ¼ cup lukewarm milk.  Dissolve crushed saffron in 2 tsp. brandy.  Mix milk, saffron, sugar, salt egg, butter and small amount of flour.  Add yeast and remaining flour; beat with wooden spoon until smooth and firm.  Sprinkle with flour, cover with a clean towel and let rise in a warm place until doubled in bulk, about 2 hours.  Turn out on floured baking board and knead until smooth.  Divide into portions and make buns in different shapes, such as the traditional S shape.  Place on buttered baking sheets, cover and let rise.  Brush with slightly beaten egg.  Sprinkle with sugar and chopped almonds and bake in hot oven (400) for 10 minutes.