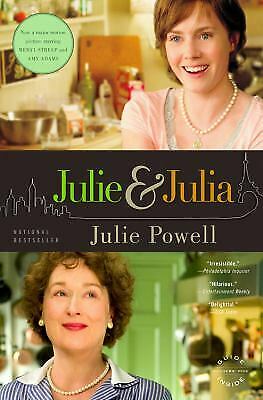 I don’t usually review movies in this blog, but when “Julie and Julia” came out, I not only had to see it, I knew I had to write about it, too.

Most of you probably know the premise, but in a nutshell: a young woman—Julie, (played by Amy Adams), is a frustrated writer in a mundane government job in New York City, living in a joyless flat with her up-and-coming husband (played by Chris Messina.)  Her self-important, self-absorbed friends add to her discontent and she finds relief in cooking.  Her husband, who is increasingly upset by his wife’s restlessness, suggests she start a blog and write about cooking.  From that beginning, a plan is born to set herself a goal and tackle Julia Child’s most famous book, “Mastering The Art of French Cooking” which contains 524 recipes—in one year.  And, of course, to write a blog about the experience.

Playing parallel to Julie’s adventure is the flash-back story of Julia Child herself (played by Meryl Streep) and how she rose to such culinary heights.  Described as “oddly charismatic and infinitely likeable” Julia, like Julie, took up serious cooking as a way to find a place of her own in the early 50’s when she went to Paris with her ambassador husband, Paul.  She tried many “typical” pursuits and eventually attended the Cordon Bleu School.  Later, she formed a cooking school and collaborated with Louisette Bertholle and Simone Beck in writing “Mastering the Art….”  She had been so enamored with the food in France she wanted the “servant-less” American to be able to duplicate it.

I found the movie entertaining and, for the most part, well done.  Meryl Streep overplayed the raucous laughter and made Julia out to be a little more of a buffoon than I think she was.  I am old enough to have watched all her educational television series, “The French Chef” and have a different take on her personality.  I thought the young Julie, Amy Adams, was delightful—but, of course, I’ve never met the real Julie.  Most of all, however, I loved the premise of loving to cook good food.  I had a lump in my throat when I realized that someone else really wanted to start at the beginning of a cookbook and cook all the recipes.  Maybe one day I will.

In honor of the movie I made Poulet Saute aux Herbes de Provence, a simple and wonderful version of fried chicken. 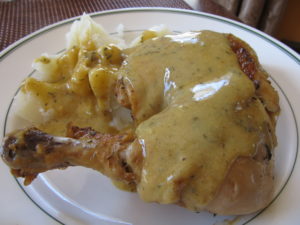 Heat the butter in a heavy, 10-inch fireproof casserole, skillet or electric skillet set at 300 degrees.  When it is foaming, turn the chicken pieces in it for 7 to 8 minutes, not letting them color more than a deep yellow.  Remove the white meat.  Season the dark meat with herbs, salt and pepper and add garlic to the casserole.  Cover and cook slowly for 8 to 9 minutes.  Season the white meat and add it to the casserole, basing the chicken with the butter.  Cook for about 15 minutes, turning and basting 2 or 3 times, until the chicken is tender and its juices run pale yellow when the meat is pricked with a fork.  When the chicken is done, remove it to a hot platter, cover and keep warm.  Mash the garlic cloves in the casserole with a spoon, then remove the garlic peel.  Add the wine and boil it down over high heat, scraping up coagulated saute juices until the wine has been reduced by half.  Beat the egg yolks in a small enameled saucepan until they are thick and sticky.  Beat in the lemon juice and wine. Then beat in the casserole liquid, a half-teaspoon at a time to make a thick creamy sauce like a hollandaise.  Beat the sauce over very low heat for 4 to 5 seconds to warm and thicken it.  Remove from heat and beat in more butter by tablespoons if you wish.  Beat in the herbs and correct seasoning.  Spoon the sauce over the chicken and serve.