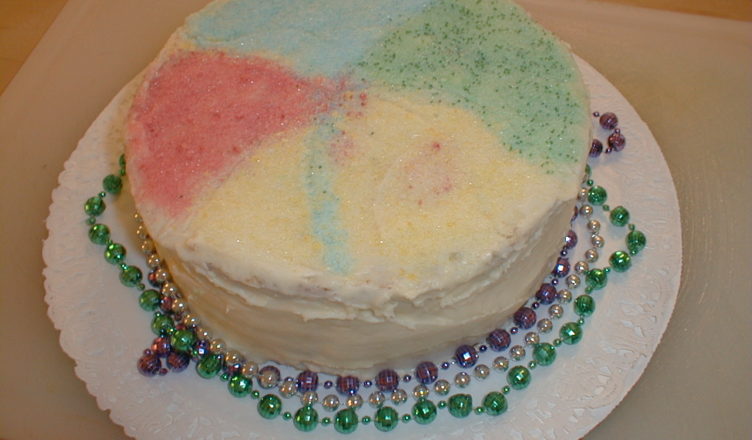 Mardi Gras celebrations begin on Twelfth Night (January 6) and continue until Shrove Tuesday, the day before Ash Wednesday.  It is a period of feasting and revelry unparalleled in other festivals in America.  Another term for this period is carnival which literally means farewell to meat (Latin) and anticipates the rigors of Lent.

It is likely that the first Mardi Gras was celebrated in 1699 before New Orleans even existed, by French colonists in a temporary camp pitched 30 miles above the mouth of the Mississippi.  By mid-18th Century the custom was well established in New Orleans and was mainly an excuse for licentious frolic.

In 1857 the celebration we see today began when socially prominent young men who were irked by the ill-bred antics of the common people, formed a secret society called the Mistick Krewe of Comus, staging a splendid parade with floats and costumes and a ball to which only the best people were invited.  Today the parades and balls have multiplied and Mardi Gras and New Orleans are inseparable.  (Information taken and adapted from Time-Life’s Foods of the World.)

I lived in the south many years ago and had a great friend who was a Creole woman.  She taught me to cook many things that are so good it’s hard to believe they all come from very homey and basic ingredients.  But that is the magic of the cooking in New Orleans; whether you have the fresh seafood from the area or just some herbs and red beans, the food made with the skill of the Creole and Acadian people is superb and gives New Orleans the reputation of serving the finest cuisine in the country. 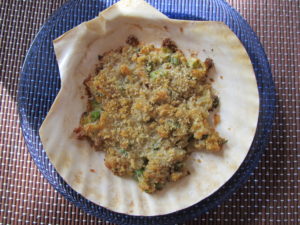 Preheat the oven to 400.  With a pastry brush, spread the tablespoon of softened butter evenly over the bottoms of six medium-sized natural or ceramic crab or scallop shells.  Combine 2 cups of the bread crumbs with the clam juice in a bowl, mix well and set aside.  In heavy, large skillet, melt 4 Tbsp of butter bits over medium heat.  Add the onions and stir for about 5 minutes.  Remove from the heat and stir in the moistened bread crumbs, the crabmeat, scallions, parsley, red pepper and salt.  Taste for seasoning.  Spoon crabmeat mixture into the buttered shells, dividing it equally.  Sprinkle the remaining 2 Tbsp bread crumbs and remaining 3 Tbsp. of butter bits over the tops and arrange the crab or scallop shells side by side in a large shallow baking dish.  Bake in upper third of oven for 25 minutes, then slide them under the broiler for 30 seconds to brown tops.  Serve immediately in the shells.

SHRIMP REMOULADE  (serves 6 to 8 as a first course)

Combine mustard, paprika, cayenne and 4 tsp. salt in bowl and whisk until combined.  Beat in the vinegar.  Whisking constantly, pour in the oil in a slow, thin stream and continue to beat until smooth and thick.  Add scallions, celery and parsley; mix well.  Let rest at room temperature for 4 hours before serving.  Meanwhile, shell and devein shrimp.  Wash briefly under cold running water.  Drain.  Bring 2 quarts of water and 1 tsp. salt to a simmer, drop in shrimp and cook for 3 to 5 minutes.  Transfer to a plate to cool.  Chill until serving time.  Just before serving, mound the shredded lettuce attractively on six to eight chilled serving plates and arrange shrimp on top.  Spoon sauce over shrimp and serve.

Gumbo is a fairly complicated dish to make and requires a lot of ingredients you may not have, but the following Jambalaya recipe is much less difficult and delicious! 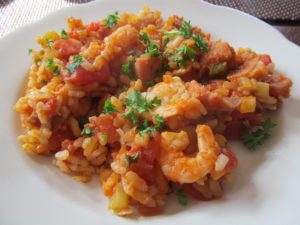 Bring water and 1 tsp salt to a boil in small saucepan over high heat.  Add rice, stir once and cover the pan.  Reduce the heat to low and simmer for about 20 minutes until all liquid is absorbed.  Fluff with fork and set aside.

Shell and devein shrimp.  Wash in colander.  Drop in enough boiling salted water to cover completely and cook briskly, uncovered for 4-5 minutes or until pink. Remove with slotted spoon and set aside.

In heavy 5-6-quart casserole, melt butter.  When foam subsides, add onions, garlic and cook 5 minutes, stirring frequently.  Add tomatoes, tomato liquid and tomato paste and stir over moderate heat 5 minutes.  Add celery, green pepper, parsley, cloves, thyme, red pepper, black pepper and remaining teaspoon of salt.  Cook over medium heat until tender and mixture is thick—stirring frequently.  Add the ham and cook for 5 minutes, stirring frequently.  Then stir in the shrimp and heat through; add rice.  Stir until mixture is hot and the rice has absorbed any liquid in the pan.  Taste for seasoning.  Serve.