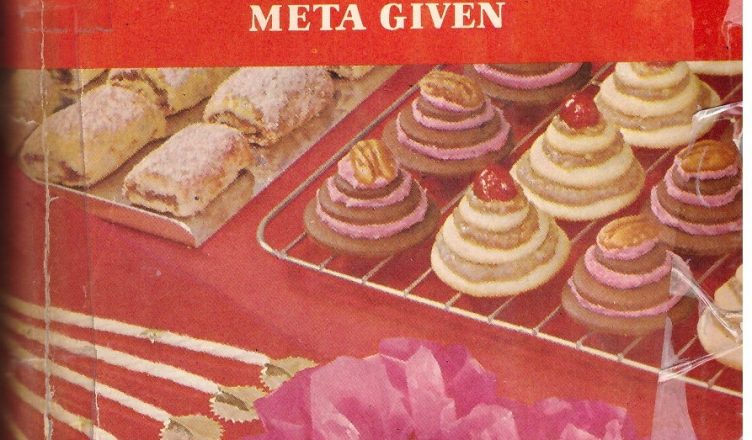 When people learn that I have over 2000 cookbooks in my collection, they sometimes ask if I cook out of all of them, or which is my favorite or, most often, Why do I collect cookbooks.

The last question is the one that is the hardest to explain, so here goes:

I love to read cookbooks.  They are full of cultural information from the place, era and perspective of the author.  Women and men who write cookbooks usually have strong opinions on what makes a dish good and how to cook it, serve it and enjoy it.  They seem bent on sharing that information with people–a sentiment I humbly share.  Background information varies as much as the cookbooks themselves.  Some are written by people who have degrees in Home Economics and Chemistry.  Many have positions with large food companies researching and trying out products.  Others have been food editors for women’s magazines or newspaper columns.

Then there are celebrity cookbook authors, both celebrated cooks and just celebrities who want to write a cookbook.  A lot of cookbooks feature a country or foreign cuisine.  Not all are written by a designated author but rather a group of editors for the publication.  Yet, if you care to dig deeply enough, you usually find the name of one main person who actually wrote the pages and another who photographed the recipes.  I have one cookbook, Amy Vanderbilt’s Complete Cookbook, that is illustrated by Andy Warhol!

Still other writers are just simply ordinary people who gathered family recipes or community and church members’ recipes to fund-raise and showcase the area’s cuisine.  Usually cookbooks are written by people whose cooking is highly prized by the people in his/her life.  The biographies of these people, when available, are extremely interesting.

Finally, the era of the cookbook gives me a wealth of knowledge about the time in which it was written.  Here, even standard cookbooks such as Betty Crocker or Better Homes and Gardens cookbooks are interesting.  I have every Better Homes and Gardens cookbook from the 1920s until the 21st century.  Each edition has pictures and stories that tell the tale of its time; depression era, World War II, the barbecue and suburban lifestyle of the 50s, back to whole grain, made from scratch in the 70s and on to the new age, modern era of food today.  Not only do the recipes and food trends change, but so do the pictures of kitchens and the dress of the times.

I am going to attempt to write about my cookbooks and share some of this pleasurable pastime with you–it is going to be difficult to select the ones I enjoy most because, for different reasons, I love them all.

THE MODERN FAMILY COOKBOOK by Meta Given 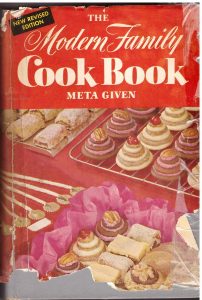 First, about the author:  (from the dust cover biography):

“Meta Given was concocting recipes at ten years of age in her home in the Ozarks.  Early she began to use her ingenuity with the simple foods at hand, dressing them up a bit, making unusual combinations , serving them in new ways.

Before many years she was teaching other girls to cook, guiding their efforts, particularly during World War I, in the canning and drying of foods.  Meta Given studied at the Universities of Missouri, Wisconsin and Chicago, with food study her major interest, with chemistry, physics, and agriculture helping her to understand what happens to foods as they are cooked and how one’s health is affected by them.

For ten years a syndicated newspaper column, “Easy Preparation of Good Food and Nutritious Meals,” has been one of Meta Given’s principal interest.  Through it she has made contact with a great number of readers, men as well as women in various parts of the country and from it grew the idea of this cook book.”

This book was written in 1942 and revised in 1953, 1958, and 1961.  Of special interest to me in this book and most others of this era is the emphasis on the role of the homemaker.  In her introduction Mrs. Givens writes this:  “Mrs. Homemaker, this book is written for you…in full appreciation of your problems of running a home.  These problems would challenge a psychologist, an expert on child training, an interior decorator, a skilled seamstress, a trained nurse.  In addition your problems demand nutritional knowledge and cooking skill for their solution.  Unless you belong to the 10 percent whose budget is not strictly limited, you are daily faced with the necessity of budgeting the income of one average husband–a problem to stagger any financier!”  Certainly an old-fashioned view of a woman’s role; but perhaps there is an argument for that kind of attitude toward homemaking as a worthwhile career.

She goes on to say (because, after all, this is a cookbook not a treatise on the value of women):  “It’s impossible to pick out just one of your numerous functions and say that it is more important than all the rest.  But if we had to do it, we’d venture to say that the function of dietitian and cook comes near the top of the list.  ‘Show me what you eat and I’ll tell you what you are,’ is an old true saying that is better understood today than ever before.  Our health and happiness, social effectiveness, even business and professional success is profoundly influenced by the state of our nutrition.”

The book has three main parts:  I Planning, II Buying and III Cooking, each headed by a “Creed” expressing the importance and the dignity of the homemaker’s tasks.

In the opening part of the book, menus are given for one week, three meals a day, for each month.  I love these menus because they remind me of the meals I had growing up.  I was born in the mid-forties and remember our meals from the 50s especially.  My mom was an excellent cook and an avid homemaker.  We were always very healthy and had normal weight and plenty of energy.  It seems like we enjoyed almost everything she made and weren’t as particular about food dislikes as children today–but I might be mis-remembering.

Here is a sample menu from a Sunday in July:  Very typical of a Sunday dinner in my childhood.

Breakfast:–Sliced Peaches on Prepared Cereal with Milk ; Toast with Butter and Jam; Coffee for Adults, Milk for Children

The Steak Roll is a recipe I remember as one of my favorites made frequently by my mother:

Wipe steak thoroughly with damp cloth and pound all over vigorously with edge of a heavy saucer.  Sauté onion in fat until yellow; add to bread crumbs and combine lightly with all remaining ingredients; if crumbs are quite dry, more liquid may be added.  Spread dressing over the steak and roll up like a jelly roll; secure by tying at ends and center with string.  Brown on all sides in a small amount of fat in a skillet; add 1/2 cup hot water, cover tightly and bake in a moderately slow oven (325F) 1 hour or until meat is very tender.  Remove meat roll to hot platter, remove string and keep hot while making gravy from drippings in skillet.  5 servings.

One of the fun things about vintage cookbooks is that they often contain clippings, coupons, pay stubs and all manner of loose material between the pages.  This book has newspaper clippings of a column called “Cooking Is Fun” from the Grand Forks North Dakota Herald circa 1940s or 50s.  Also a small packet apparently sent for from the Rockwood Chocolate Company containing several recipe cards using Rockwood Chocolate Bits. A 10-cent coupon for Post cereals and a few other miscellaneous items were among the loose treasures.