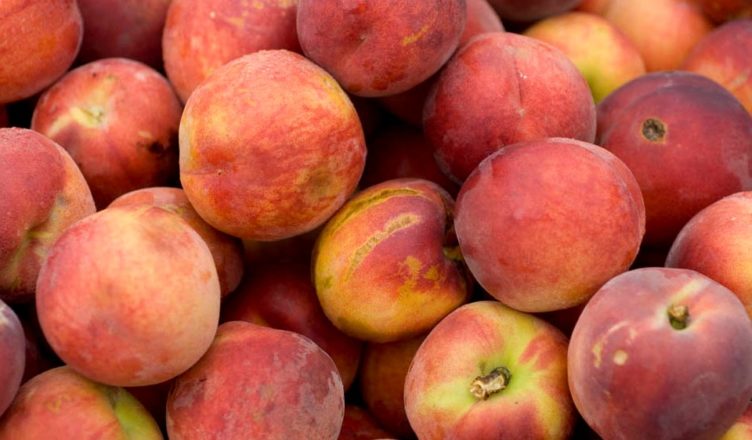 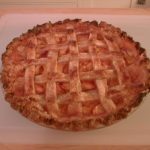 The good peach season is short—so now is the time to make those succulent pies, cobblers, drinks, ice-cream or just to stand over the sink and eat them plain, letting the juice run down your chin.

Here we go again—when I was young…  But truly, the peaches were more dependably good then.  I can even remember when they started shipping fruit that could withstand the treacherous journey—it was hard, wooden and juiceless.  The ads said to put them in a paper bag and let the ethylene ripen them—but even doing that didn’t always work.  Some just rotted before they ripened.  Now, however, MOST of the time, the peaches are good.

The peach is the third most important fruit crop in the United States coming in after second place orange and first place apple.  Its close cousins include the cherry, apricot, plum and the almond, all members of the Prunus genus.  Peaches are often confused with nectarines which have smooth skins, while the peach sports a fuzzy, velvety one.  Actually the nectarine is a variation of the peach and both fruits can occasionally be found on the same tree.

Poets and artists have dwelt on the charms of the peach.  In China, where the peach is native and has grown for thousands of years, its fruit and flowers are used extensively in decorative art and porcelains painted with a peach blossom are given as birthday gifts to express the wish for many happy years.

Here in America, though, I believe we reach one of our culinary highpoints in peach pie, followed closely by peach cobbler and peach ice cream.  Even so, peaches are delicious served fresh, canned (they are unusually good), or dried. They can be stewed, baked and even grilled. They are fantastic in jam, conserves, nectar, and mixed fruit compotes.  They make wonderful smoothies and other drinks such as peach daiquiris.

When you purchase peaches, be very careful to select fresh, firm peaches, free from blemishes.  Avoid any with a green-tinge; they will not ripen.  Bruises are common and should be avoided.  I like to apply a little pressure (not much, you don’t want to be the bruiser) and good peaches should give ever-so-slightly.  Peaches which will reward you with good, sweet flavor and plenty of juice always smell heavenly.

To remove the fuzzy skins, carefully put the peaches into a large saucepan that will hold them in a single layer.  Cover them with cold water and put them over medium-high heat.  When they come to a boil, time them for 1 minute, remove them immediately from the heat and put them into cold water.  The skins should slip off easily.

Here are my favorite peach recipes: 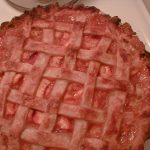 Prepare crust and refrigerate, covered, for at least 30 minutes

For Glaze:  Combine all ingredients in small saucepan and stir to blend.  Cook over medium heat until reduced to about three-fourths cup, about 45 minutes.  Strain and cool slightly. 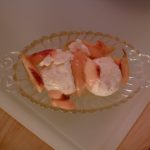 For Ice Cream:  Bring 1 cup cream, half and half, and one-half cup sugar just to simmer in medium saucepan.  Whisk yolks in medium bowl; gradually whisk in cream mixture.  Return mixture to saucepan.  Stir over medium heat until custard thickens and leaves path on back of spoon when finger is drawn across, about 4 minutes (do not boil). Strain into bowl.  Refrigerate custard until cold, about 3 hours.

Place peaches, corn syrup and one-fourth cup sugar in medium saucepan.  Stir over medium heat until peaches are heated through, about 4 minutes.  Mash to coarse puree.  Cool completely.  Stir into custard along with vanilla and one-half cup cream.  Process custard in ice cream maker according to manufacturer’s instructions.

For Compote:  Mix all ingredients in medium bowl.  Let stand 10 minutes and up to 1 hour.  Serve over ice cream. 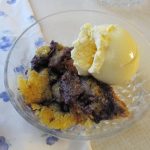 Mix first 3 ingredients; add fruits.  Cook and stir till mixture thickens.  Add 1 Tbsp butter and lemon juice.  Pour into 8 ½ x l ¾ inch round cake dish. Sift dry ingredients.  Add milk and butter all at once; beat smooth (can use electric mixer).  Pour over fruit (or spoon in dollops if too thick to pour).  Bake at 350 for 30 minutes.  Serve with cream or ice cream.  Serves 6.

Heat grill to medium.  Halve and pit 2 large ripe peaches; prick skins with a fork.  In a bowl, stir together 2 Tbsp. each melted butter and light-brown sugar; brush butter mixture over peach halves, coating entirely.  Grill on both sides until fruit is tender, 5 to 10 minutes.  Serve warm, topped with ice cream and drizzled with Raspberry Sauce

Raspberry Sauce
In a bowl, toss one-half pint raspberries with 2 Tbsp. sugar; let sit 5 minutes.  Pass through a sieve into another bowl, pressing with a spoon to extract as much liquid as possible; discard solids.

To make peach butter, put one-half cup peeled, sliced peaches, 1 cup butter and one-half cup powdered sugar in blender or food processor.  Whirl until smooth.  Chill and spread on crepes, then fill with fresh peaches and heat.  (This butter is also delicious on toast or with muffins, waffles or pancakes.)