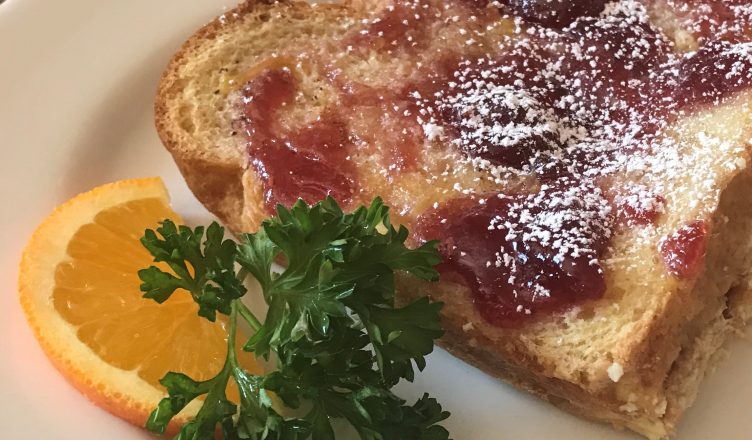 I’m so old I can remember when we got two days off school in February; one on the 12th for Abraham Lincoln’s birthday and one on the 22nd for George Washington’s birthday.  Now they’ve rolled it all into one “President’s Day”, which is this coming Monday.  I decided to find out if any other Presidents had birthdays in February and only 4 of our 43 presidents were born in February; the aforementioned Washington and Lincoln, William H. Harrison and Ronald Reagan.

We always made cherry pies for Washington’s birthday and decorated the table with stovepipe hats and profiles of honest Abe on their respective birthdays, but I turned to one of the most interesting cookbooks in my collection, The Presidents’ Cookbook by Poppy Cannon (former food editor of Ladies’ Home Journal) and Patricia Brooks in hopes of finding some very authentic and different presidential food ideas.  It is full of information on the personal food preferences and official entertaining menus for state dinners and other official functions of each.  It really is well done and fascinating, but there is one big problem with this book—it was published in 1968 and ends with Lyndon B. Johnson, although as it went to press, Richard Nixon was in the white house and the book includes an addendum including his administration.

So for old-times sake, I am focusing on the two presidents we formerly feted in February.

George Washington had the daunting task of establishing the etiquette and protocol of the new nation’s presidency.  He tackled the job by calling his newly appointed Cabinet together to discuss it.  He himself said:  “My manner of living is plain, and I do not mean to be put out by it.  A glass of wine and a bit of mutton are always welcome.  Those who expect more will be disappointed.”  This, however, is an example of the “plain living” offered guests at a Presidential dinner:

Wines and punch (one guest observed).  We took our leave at six, more than an hour after the candles were introduced.  No lady but Mrs. Washington dined with us.  We were waited on by four or five men servants dressed in livery.

By contrast with the elaborate hospitality of the President’s household, George Washington’s own eating habits were relatively simple.  One observer of the time said that he “took what came with philosophy”; certainly no one could accuse our first President of having been a gourmet.  He ate heartily but was not particular in his diet, with the exception of fish, of which he was excessively fond.  A special passion of the President’s was nuts.  On one occasion, the Prince de Broglie reported that “at dessert he eats an enormous quantity of nuts.”

As food reflects the man, it also reflects the times.  The food served at the President’s table from 1790 to the end of Washington’s second term, 1797, indicates the new nation’s dependence on the land.  Game, fowl, meats, plantation-grown fruits and vegetables, fish from local rivers or the Atlantic reveal the abundance of the land.  Spliced throughout the menus are the remnants of Washington’s English heritage—puddings, cream trifles, a taste for port and wine.

Because of the wonderful story of George Washington and the cherry tree, any recipe associated with George Washington would have to include cherries.  It is true that George was very fond of cherries—all fruit, for that matter—but this recipe was in Martha’s notebook of receipts and was one of her favorites: 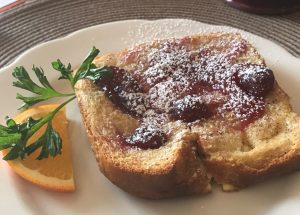 Cut slices of bread and butter them thickly.  Put a layer on the bottom of a baking dish.  Then put a layer of cherry preserves on top of it.  Add grated nutmeg and lemon peel.  Continue making alternate layers until the dish is filled.  Mix eggs, milk and sugar; pour over the bread mixture.  Let stand until the bread has soaked it up, then bake in 325 degree oven about 1 hour or until set and lightly browned.  Most delicious served warm.
(Serves 6)

Abraham Lincoln was a study in contrast to George.  He grew up on the frontier of Kentucky were he ate very plain food, partly for economic reasons, partly because of the frontier tradition.  Corn dodgers, cakes made of coarse cornmeal, were a staple.  Wild game provided the protein a growing boy needed.  As a young man his diet consisted largely of cornbread, mush, bacon, eggs, and milk.  Mary Todd Lincoln, Abe’s wife, although also from Kentucky, came from the lush bluegrass region of the state where gracious, comfortable living and rich, elaborate cooking were legendary.  Many tales of Lincoln describe him thus: “(He) was one of the most abstemious of men; the pleasures of the table had few charms for him.  His breakfast was an egg and a cup of coffee; at luncheon he rarely took more than a biscuit and a glass of milk, a plate of fruit in its season; at dinner he ate sparingly of two courses.”

Contradictory evidence has it that Mr. Lincoln was a hearty eater.  He never lost his taste for the things a growing farmer’s boy would like.  Plentiful and wholesome food was one of the means by which he kept up his strength which was taxed almost beyond endurance in those days (during the Civil War).

Wherever the truth lies, a story by Carl Sandburg related in The Prairie Years illustrates his wry sense of humor.  During one of the Lincoln-Douglas debates, someone asked why Lincoln seemed to have so little female companionship.  Did he find no pleasure in the company of women?

“When we lived in Indiana,” the future President began, “once in a while my mother used to get some sorghum and ginger and make some gingerbread.  It wasn’t often, and it was our biggest treat.  One day I smelled gingerbread and came into the house to get my share while it was hot.  My mother had baked me three gingerbread men.  I took them out under a hickory tree to eat them.  There was a family, near us, poorer than we were, and their boy came along as I sat down. ‘Abe,’ he said, ‘gimme a man?’ I gave him one.  He crammed it into his mouth in two bites and looked at me while I was biting the legs off of my first one.  ‘Abe,’ he said, ‘gimme that other’n?’  I wanted it myself but I gave it to him.  ‘You seem to like gingerbread.’  ‘Abe,’ he said, ‘I don’t s’pose anybody on earth likes gingerbread better’n I do—and gets less’n I do.’” 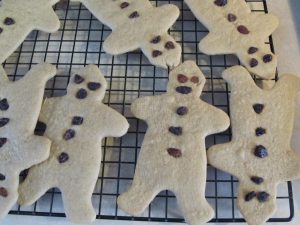 Cream butter and sugar.  Add molasses along with the spices.  Mix well and pour into a saucepan.  Bring to a boil, stirring constantly.  As mixture reaches the boil, remove from heat and cool to lukewarm.  Then add eggs and vinegar.  Mix well and add the flour, sifted with the baking soda.  Mix again until mixture forms a smooth dough.  Chill for several hours or overnight in the refrigerator.  When ready to bake, roll out on floured board and cut with a gingerbread-man cutter.  Put pieces of raisins on the cookies before baking—to form eyes, nose buttons.  Bake on ungreased cookie sheet at 350 deg. Approximately 10 minutes.  Makes 50 or so.