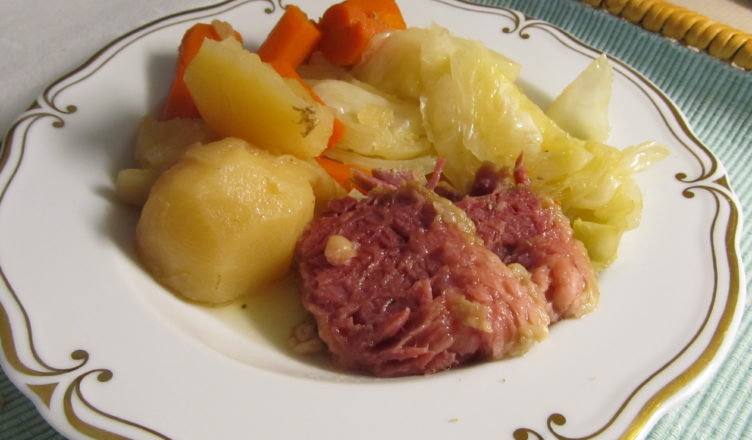 Okay, first we had Friday the 13th—and then the infamous Ides of March about which Caesar was forewarned for good reason.  Worried?  Well, then set your sights on the 17th—yes, the lighthearted St. Patrick’s Day.

First of all, normally, it’s a day of parades and lots of green—beer, as well as clothing, hair and faces.  But if you’re just having a rather conservative celebration considering our current circumstances with CovId-19, the food is homely fare that is easy to prepare and even easier to eat at home. 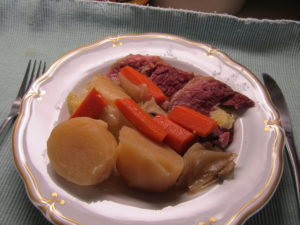 Of course, the ubiquitous corned beef and cabbage must make an appearance, but why not shake it up a little and make corned beef and cabbage pot pies?  Since it wouldn’t be an Irish meal without potatoes, try a warm potato salad and stir things up with a wonderful and unusual dessert of Bailey’s Pudding Parfait (Bon Appetit 1999).  Serve with an Irish ale, lager or stout (green or not) and accompany with a lovely soda bread and you’ve chased the ghoulies of the preceding days into hiding.

Cook cabbage in large pot of lightly salted water until tender, 5 to 8 minutes.  Drain well and squeeze dry in towel.  Melt butter in heavy large saucepan over medium heat.  Add flour and stir 3 minutes.  Whisk in milk.  Cook until mixture is smooth and thick, 4 to 5 minutes.  Gradually mix in Swiss cheese.  Add mustard, nutmeg, dill and cayenne.  Stir in corned beef and cabbage.  Cool.   Divide filling among six 1-cup ramekins, sprayed with Pam.  Cut puff pastry in half.  Roll 1 piece on lightly floured surface to thickness of 3/8 inch (refrigerate the second piece).  Cut out 3 rounds 2 ¼ inches larger in diameter than ramekins, using bowl as guide.  Reserve scraps.  Brush 1 side of round with glaze.  Arrange glazed side down atop ramekin, pressing firmly against sides of ramekin and pushing up slightly at rim; do not press down on rim.  Press pastry to sides of ramekin with tines of fork to seal.  Trim pastry overhang to ¾ inch.  Repeat with remaining 2 pastry rounds.  Roll out second piece of pastry.  Cut and assemble as above.  Reserve scraps.  Brush tops and sides of pastries with glaze.  Score tops in grid pattern; do not cut through pastry.  Roll out scraps 3/8 inch thick.  Cut out twelve 2-inch shamrocks.  Brush with glaze.  Arrange on baking sheet glaze side up.  Place pies on baking sheet.  Refrigerate shamrocks and ramekins at least 3 minutes.  Place baking sheet with pies and shamrocks in oven and bake until pastry is golden brown and filling is hot, 20-25 minutes.  Serve with 1 shamrock atop each pie and 1 on each plate. Serves 6

For Pudding:  Combine ¾ cup cream, 6 Tbsp Baileys liqueur, sugar, and nutmeg in large microwave safe bowl.  Microwave on high for 2 minutes.  Stir.  Microwave for 30 seconds, to 1 minute until very hot but not boiling.  Add ¼ cup to beaten egg yolks, stirring the while.  Add egg yolk mixture back to custard and stir until slightly thickened.  Microwave at 30% and 15 second intervals until thickened to medium pudding stage.  Beat by hand or with mixer until cool—about 8 minutes.  Mix in remaining 6 Tbsp. liqueur.  Beat remaining ½ cup whipping cream until medium peaks form.  Fold into custard.  Chill, covered for at least 4 hours or overnight.  Layer ¼ cup pudding, 1 Tbsp. currants and 3 Tbsp crunch in each of six 12-oz goblets; repeat layering 1 more time.  Serve immediately or refrigerate up to 1 hour.

Note:  If you do not want to use the microwave, custard can be cooked over simmering water (do not let bowl touch water) on the stove, beating with a mixer while cooking until mixture coats a spoon, then follow above directions.