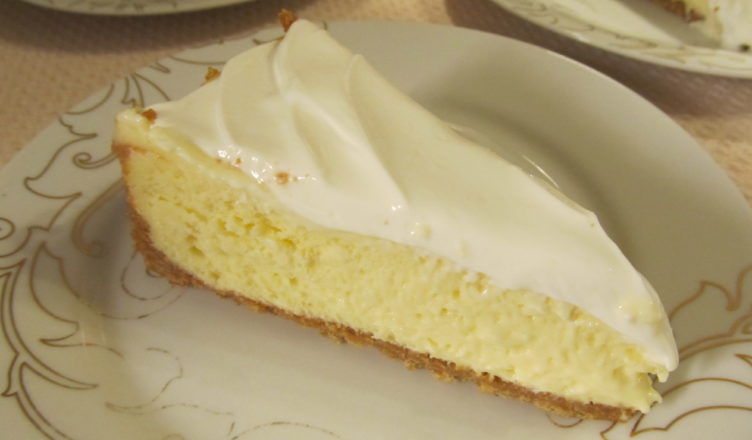 Early in the morning on one of these very hot, humid mornings we’re having, I came out of Perkins restaurant with Zig and overheard two guys standing on the curb discussing the weather.  “As soon as the sun comes up, this’ll burn off,” one of them said, referring to the cloud of heat and humidity all around us.  I laughed inwardly at the perpetual fascination with weather that we all share.

It appears it has always been so.  Weather seems to still be the unconquerable element in the physical world; now, as in the beginning of human life on earth.  All the gods of the early people were based on the sun, the moon, stars, planets—things that appeared to control the fate of man.  Most of the festivals and celebrations were based on the seasons and the movement of the sun.  The very existence of early man depended on the weather—as it still does today to a lesser extent.  It is no wonder, then, that many of our holidays and the foods we eat on those days, center on the season and the weather.

My Latvian husband concurs that one of the most popular pre-Christian festivals in Latvia is Jani, which is celebrated on June 24, the longest day of the year.  It is a time when the worlds of men and of gods come together—a festival of nature calling upon the sprits of home, field and forest to bring forth a bountiful harvest and shield the crops and livestock from evil.  Everyone goes to the countryside to celebrate Jani with singing, dancing and general tomfoolery.  The most important part of the celebration is song.  Songs accompany every activity of the Latvian culture.  Zig recalls going to Indianapolis to a large gathering of Latvian immigrants to celebrate this day with an all night songfest and his mother ran into a long lost cousin from the old country.

The midsummer celebration begins on the evening of the 23rd which is called Ligo (day of grass) and continues until the sunrise on the 24th.   A bonfire is lit for the celebration and everyone jumps over the fire to cleanse themselves for the new season.  Jani is also the name day for everyone named John, anyone named John (Janis) is expected to jump several times for good luck.  Just before midnight, the group leaves the bonfire and walks, singing, to the neighboring farms, carrying cheese and piragi for gifts and drinking beer.  Cheese is eaten so that cows may thrive and beer is drunk for the horses.  Revelers continue on until returning home right before the sunrise.  One of the many Latvian folk songs for this occasion is as follows:

Janis came over the hillside
A bundle of grass on his back.
Come dear Janis down the hill
Give the grass to my heifers;
I shall give you a chunk of cheese
For feeding my heifers.

If you’re into authenticity, you can make the Latvian cheese at home—but in case you’re not that into it, here are two versions of cheesecake to celebrate the Summer solstice.

Bring milk to a boil.  Process cheese and caraway in food processor.  Set over low heat until cheese begins to separate.  Add the clotted milk or yogurt.  Remove from heat.  Drain water.  Remove cheese mass from the pan and place on cheese cloth.  Press moisture from cheese.  In a separate pan, melt butter.  Add the cheese, beaten eggs and cook over medium heat until the mixture is yellow and thick.  Place mixture on cheesecloth and press out moisture.  Serve with honey and bread. 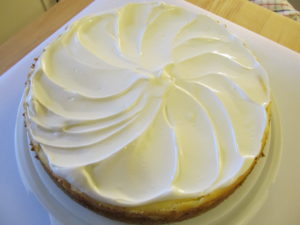 Heat and stir continually until thickened.  Cool to room temperature and top cake.

Melt butter and pour over graham crackers in food processor.  Remove and press onto bottom and sides of springform pan, reserving ½ cup crumbs.  Bake for 8 minutes at 350 degrees.  Cool. 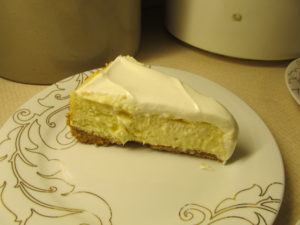 We have come along way with weather—we now have weathermen who are 90% correct on what actually occurred yesterday.  Happy summer!