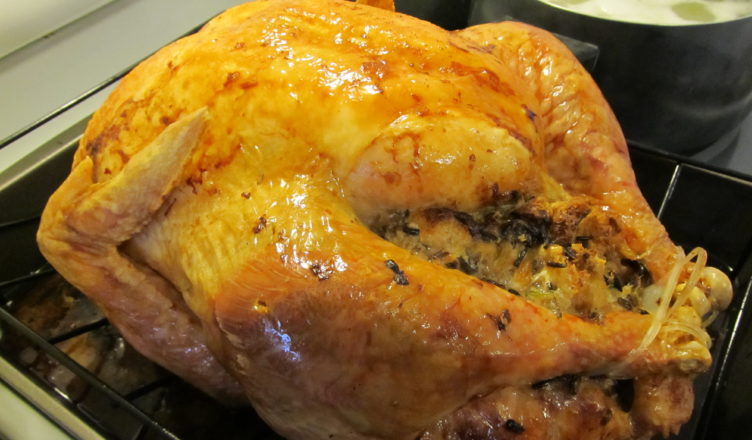 It snowed two days ago–enough to cover the lawn with 3 inches of the fresh white stuff.  The whole appearance of my world changed while I slept.  I get this awed feeling every year at the first snow and it brings back memories and nostalgia that overwhelms me.  I love living in Minnesota, with all its drawbacks, especially for this wonderful change of seasons.

The first snow, and the cold that cames with it, ushers in the start of the serious holidays.  Of course, the media has been touting Christmas for a few weeks already–starting back in the middle of September as the leaves were just beginning to change.  What a shame!!  Hurrying life along so fast doesn’t allow us to savor each time for its own beauty and depth.  God has been so good and so merciful to give us the seasons, the beauty of nature, the love of family and friends, the plenty that we enjoy, that it is truly a shame to skip over any of it too fast.

Thanksgiving is exactly the right name for the special day that we take time to truly appreciate all that we have.  This year, Zig and I are going to Clearwater Florida to join our family for a celebration.  We have, between us, four children, their spouses, and nine grandchildren.  That alone is reason to give thanks.  Since we all live at a distance from one another, it is rare for all to be together –and only one will be missing–our oldest grandson who cannot get away from work in Missouri.

Tradition will reign.  Of course, I’m not the hostess but I think I know my family well enough to know that my lovely daughter-in-law Whitney will plan a traditional meal.  Her side of the family will be coming, too and everyone will probably bring something–so it will be fun to see how tradition plays out with them.

When polled, over half the people named Thanksgiving as their favorite holiday.  Why is this so?  Well, of course, there’s the food and food is of central interest on Thanksgiving.  The gathering is great, too, since people get together to enjoy food, the day and the unique pleasures of being American such as football games and full stomachs.

But I think the main underlying reason is that it is the quintessential American holiday.  No matter what our ancestry or ethnic background, our religion or lack thereof, we all seem to identify with the concept that brought our forefathers here from somewhere else and we share in the thankfulness for being Americans,  Thanksgiving is American Pride Day.

At the first Thanksgiving, the fare was more meager than we sometimes like to think.  The Pilgrims were only marginally successful with their first year’s crops and half of their population had been lost over the prior winter.  Massasoit, chief of the Wampanoag tribe was invited to attend and when he showed up with a large assortment of other tribesmen, the Pilgrims must have been more than a little worried.  But as Providence would have it, these Indian people saved the day.  They began by going hunting and showing the Pilgrim men some tried-and-true methods for bringing back the five deer–along with game birds and eel–which are listed along with leeks, wild mushrooms, groundnuts, dried berries, wild plums, watercress and other “sallet” greens as the foods eaten during the three day meal.  Corn bread and succotash were on the menu too,  Perhaps it wasn’t until later that pumpkin and turkey and cranberries became staples on the Thanksgiving menu,

Never mind.  Those foods were naive to the New World and surely showed up soon afterward and our Thanksgiving menus pay homage to the ingredients available during the early periods of New England’s history.  Here are some traditional recipes that I especially like–but do your own traditional dinner.  I can hardly wait to find out what ours will be this year. 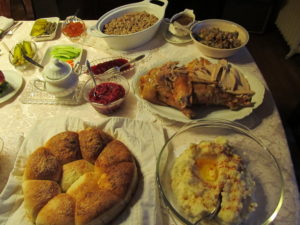 Roast Turkey with Giblet Gravy (and without) 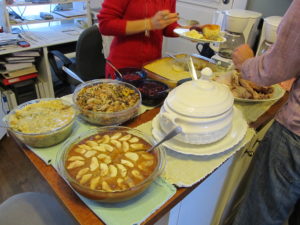 If you’re looking for a different or an additional dessert to add to your dinner besides the usual pies, I have one that is absolutely delicious.