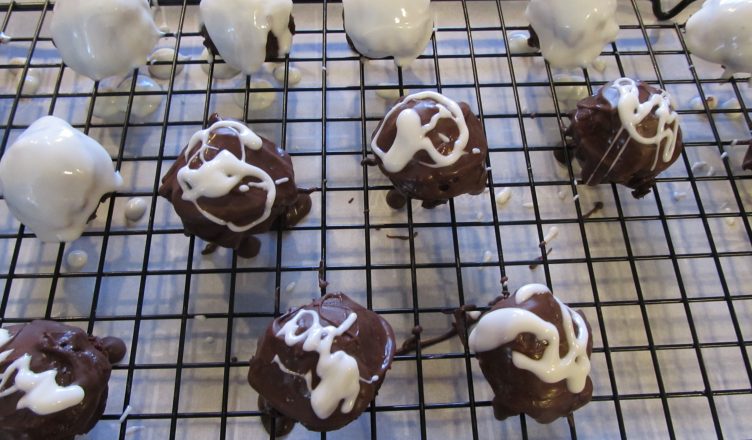 Today is Valentine’s Day.  If you’re looking for something special to celebrate, I think candy’s dandy.  And you can whip up some homemade candy that’s delicious and inexpensive in no time.

I wasn’t always an advocate of making candy at home; as a matter of fact, of all the things that I am afraid to cook—candy takes first place.  Let me explain.

Years ago (never mind how many) when I was a young bride, I decided to make a birthday cake for my husband.  His favorite cake and frosting was a specialty of my mom’s and I thought I’d call and get her recipe.  The frosting for the chocolate cake was a true fudge frosting made like old-fashioned fudge—cooking the sugar and chocolate and cream or milk until the soft-ball stage, then cooling it down without stirring, adding butter and beating until it set up to frosting consistency.

I made the cake without mishap and confidently began the frosting.  I was too young and cocky in those days to even worry about a failure.  But a failure would be putting it mildly.  Since I didn’t own a candy thermometer, I used the cookbook advice of testing the mixture by dropping a small amount in cold water and rolling it into a “soft ball.”  If it just spread out in the water, it wasn’t done yet; if it rolled into a hardball or a stiff, crackly thread, it was overdone.

Several hours later, with a kitchen piled top to bottom with chocolate: pans, counters, spoons, and me. After kneeling in front of the refrigerator with my pan of chocolate, beating it in the refrigerator because I thought it was too hot in the kitchen for the frosting to set up, I finally gave up and went to the bedroom and cried until I fell asleep in exhaustion.

When my husband arrived home he took one look around and suggested we go out to eat.  I have never made that frosting or any cooked candies since.

This year, I decided to find some recipes for candy that would taste delicious and still keep my sanity.  I think you’ll agree that these fill the bill. 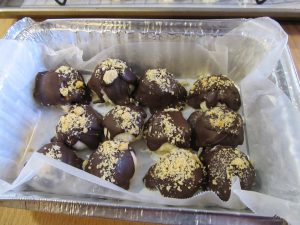 Beat cream cheese, butter, powdered sugar and syrup until smooth.  Cover and refrigerate for at least 1 hour.  Shape into 2-in. balls.  In a microwave or heavy saucepan, melt candy coating, stirring often.  Place balls of candy on waxed paper set on a large baking sheet.  Spoon chocolate over candy; sprinkle with peanuts.  Refrigerate until ready to serve. 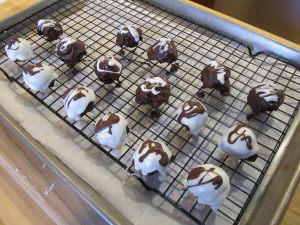 In heavy saucepan, combine butter, cream and chocolate chips.  Cook over low heat for 4-5 minutes or until chocolate is melted.  Remove from the heat; stir in jam until combined.  Transfer to a small freezer container; cover and freeze for 20 minutes.  Drop by teaspoonfuls onto a foil-line baking sheet.  Freeze for 25 minutes.  Roll into balls; freeze until very firm.  In a microwave or heavy saucepan, melt candy coating and shortening, stirring often.  Cool slightly; spoon over balls.  Place on a wire rack over waxed paper.  Let stand for 15 minutes or until firm.  Store in an airtight container in the refrigerator.  Yield:  4 dozen